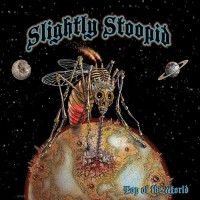 After an unbearably disappointing Chronchitis burdened by bland blues, acoustic humdrum and bad hip hop, Slightly Stoopid has returned to what they do best: Lush So-Cal reggae, sunny guitars, and a re-emergence of the ska energy that has been missing on Slightly Stoopid LPs since their 1998 breakthrough, The Longest Barrel Ride.

Top of the World is an interesting case study in the metaphysics of quality, in that it contains both a healthy sampling of well-composed, coherent, complete, and aesthetically pleasing tracks ("Don't Stop," "We Don't Wanna Go," "Work") and a handful of additions that don't add or detract much either way (the two-and-a-half minutes of more-blues-than-hiphop "Hiphoppablues," the instrumental "Deal with Rhythm" and the largely directionless "Pon Da Horizon").

While songs like the sweet, brass-infused "Don't Stop," catchy reggae of "Serious Man" or honey-dripped "Work" absolutely make the album worth listening, the minute-long "New Day" and funk-bass adaptation of "Devil's Door" from the band's acoustic disc Live and Direct are fairly skippable. Though they summon a handful of noteworthy guests from Fishbone's Angelo Moore ("Ska Diddy") to G. Love ("Hiphoppablues") to Jurassic 5's Chali 2na ("Just Thinking"), only Barrington Levy's and Don Carlos's vocals on "Ur Love" and "Marijuana" respectively sound totally natural and on point with the rest of the album.

The album's closer "Intro to Organics" is perhaps the most intriguing track of the record, entering with a pleasant instrumental reggae composition, but ending with a return to the band's thrash-punk capabilities that were entirely absent on Chronchitis but a staple of previous records.

It's certainly not The Longest Barrel Ride and not even close to the cohesiveness of Closer to the Sun or Everything You Need, but Top of the World ditches much of the dull jam-band truisms of Chronchitis in favor of the bright, infectious reggae Slightly Stoopid does best.

Off With Their Heads/The Slow Death: Live in Miami