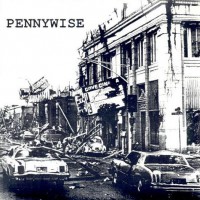 Wildcard/ A Word From The Wise consists of Pennywise's first 2 EP's originally released as 7 inches on Theologian Records in 1989 and later re-released together onto CD in 1992. Being their first recorded material I was hoping it would be similar to their Self Titled debut, fast, raw and with a youthful, idealistic, urgency that I felt wasn't as tangible after Unknown Road.

What greeted my ears was a complete surprise. The classic Pennywise double time, unrelenting, many would say predictable, mid 90's skate punk sound isn't at the forefront as it is in all of their subsequent releases. A Word From the Wise / Wildcard is a more light hearted collection of songs and comes across as a young band having fun, experimenting and not taking themselves too seriously as they find their sound.

Musically there are more mid tempo numbers and even a few funk tracks that definitely challenge the 'all Pennywise songs sound the same' perception. "Gone" hints at what the future has in store for Pennywise and sounds like it could have been a B side from their Self Titled. Jim's vocals are noticeably higher and not as urgent or angry on subsequent releases and lyrically there are a few surprises also with a few love songs in the mix which at times come across a little awkward i.e. "Covers".

A classic cover of "Stand by Me" rounds out the disc and is the only song on here that still regularly finds it's way into their live set. That being said, a much faster version of the opening track "Final Chapters" was a pleasant surprise on their live album Live at the Key Club released in 2000.

Wildcard / A Word From the Wise is the Pennywise release that doesn't sound like a Pennywise release. It's not their best work though existing fans of the band will find it interesting to see where the band came from. I'll be interested to see if the Wildcard / A Word From The Wise EP's are included separately in their original 7 inch format in the box set rumoured to be coming out this year.

La Dispute: Rooms of the House