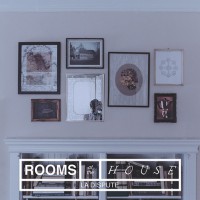 It's hard to find a mid-ground when it comes to La Dispute. Somewhere At The Bottom Of The River Between Vega And Altair and Hear,Here III are the records that stand out to me and while Rooms Of The House manages to continue their lyrical narrative about human relationships and connectivity. It steers La Dispute into a wider musical exploration, as they divert into a more melodic stream. Nonetheless, they still exemplify what they've been adored for over the years - a record with heart and soul.

The majority of tracks lie in the mid-tempo to slow range musically as La Dispute resist the inclination to go with heavier, drowned out post-hardcore sounds. There's enough on the opener "HUDSONVILLE MI 1956" to claim a typical La Dispute sound in its thick bassline and dramatic post-punk guitarwork while still instilling in you a hint that something different will ensue. Coupled with "First Reactions After Falling Through the Ice", you get an early sense that the record touches on isolation and liberation as they opt for a more melodic layout and a cleaner production compared to old, which their close friends Touche Amore also toyed with last year, to relatively critical acclaim. This throws back to when bands like Thursday, The Used or Taking Back Sunday also branched out to varying sounds but fans should gain relief as most of the tracks indicate while there's a subversion of sorts, La Dispute still doesn't totally lose their essence.

Jordan Dreyer sounds the same - giddy and emotionally conflicted - and this uncertainty brings yet again, a welcomed tension. Songs like "For Mayor In Splitsville" would throw you for a loop as it's so simple and poppish to reiterate that this is one of the less musically-intricate albums the guys have put out. But they offset curveballs like that with songs that are more dense in the post-hardcore realm such as "SCENES FROM HIGHWAYS 1981-2009" and "Stay Happy There" which have such a nostalgic Thursday-like effect. They come off rushed, panicked and less heavier than expected but the flushed riffs and nimble hooks play off Dreyer so well as he weaves his usual room-for-interpretation via grating, abstract portions on the mic. It's more a record about experience rather than a concept album as he relates on life and when a relationship ends after a couple lives together, someone is left with these inanimate objects that dredge up memories and leave you living with ghosts.

"Woman (in mirror)" starts off with what sounds like an electronic percussion setup which allows La Dispute's 'wordspeak' to emerge and a few tracks later, it's followed up by "Woman (reading)" which has a more singalong vibe as it climbs into a spaced-out, guitar driven finale. It's just one of the rare pieces of aggression on the album, which punctuates how minimalistic the team went. It's a non-complex assembly of 11 tracks that brings to light themes of recluse, introversion and retrospection, which should bode familiar for La Dispute fans. If you're a new fan, this may well be a great jumping-on point for you, but if you trace from Rooms Of The House backwards, you may be a tad thrown-off by what they've constructed. At first glance, it may seem more controlled, pacified and constrained a sound, but if you know the band, they never make music with restraint and as the album plays out, Dreyer's experience becomes your own.

Pennywise: Wildcard / A Word from the Wise

Sweet Weapons: All Of My Best Friends Are Dogs