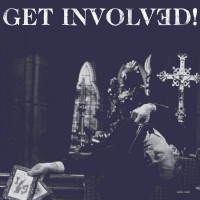 Get Involved! have cooked up a formula that's as addictive as rock enthusiasts could ask for. They've branded themselves nicely with the Silk Cuts EP which is the perfect link-up of metal, hardcore and post-hardcore with bits of punk sprinkled on top for good measure. It's a ferocious gem and one that's too loud and powerful to ignore.

With ex-Thursday drummer, Tucker Rule, as cracking and as dominating as ever, the record doesn't rely on this driving force, but instead smartly opts for a more guitar-fueled ambiance. It's a deft move given that "Apathy" sways in and out of a melodic hardcore-punk vibe with slick, cutting guitarwork. The group's guitarists, Todd Weinstock and Brian DeNeeve, were in Glassjaw and From Autumn To Ashes, respectively, which explains the varying sounds. There's a linear progression throughout the record that recalls their past musical-houses yet still allows them to form a distinct sound with Get Involved!

Derrick Karg's vocals are ever-present and lend a lot to this torturing and sadistic element they wanted to capture and his ability to switch things up really helps strengthen the record. He manuvers nicely into the power-metal flow of "Paint It Gold" and the nerve-wracking "Let Your Guard Down". The latter glosses off a Morrissey-meets-The Cure essence with a hardcore spin on things. It brings Karg to the fore prominently once more and by then, you realize how much weight he carries with his lengthy vocals and diverse notes.

The Thursday/From Autumn to Ashes influence is felt most on "Serenity Now" which swims in between layers of post-hardcore aggression, experimental rock and some laid-back musical sections that add a fine balance to things. Amid Rule's hard-hitting, the band's grating solos and screeching guitars help position this as something AFI fans would very much get into. There's a deep sense of emotional wear-and-tear on tap and a commanding piece of storytelling to drive it home.

The Murderburgers: These Are Only Problems