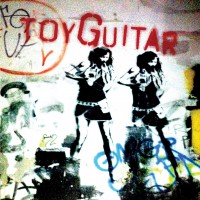 ToyGuitar is a new group led by Jack Dalyrmple of One Man Army, Dead To Me, and most recently, Swingin' Utters. Being a Dead To Me and One Man Army fan, I was very intrigued by this formation. Featuring fellow One Man Army member Brandon Pollack, Swingin' Utters bassist Miles Peck and Danielle Agnew, ToyGuitar comes off as punks venturing into garage rock. Yeah, that's right, I said garage rock. It seems awkward to say but their first release, a self-titled four-song EP, plays it safe and doesn't venture too far into the indie realm.

The EP starts with a lo-fi sound continuing throughout, giving it that garage rock feel. Track one, "Words Between Us," seems like it has all the right pieces but never really clicks. The guitar starts aggressive, the chorus is memorable and it even has a very garage-driven outro guitar lead. There's just no emphasis on the part switches, which blurs the song together.

Next up is "She's An Alarm," which also happens to be the name of One Man Army's last release (hhmmmâ¦ coincidence? I think not), which is very guitar driven. What I noticed with this EP is that every song is controlled through muffled guitar riffs. In this song guitar leads are, for the most part, going the whole time though never feel excessive. Overall it comes across as dance-y. Guaranteed the chorus will get stuck in your head.

"Tangled Up" has a somewhat bluesy feel and is locked through a moving bass line. A nice touch are the guitar leads after each chorus giving it an indie dynamic. The last song, "Shoot The Piano Player," kind of blends together until the break near the end of the song. After the break, a guitar lead driving the outro saves it.

This is one of those release that grew on me the more I listened to it. All of the songs pretty much consist of the same tempo and often times blend together. I feel these songs could've been slightly rearranged and used for One Man Army. None the less, it's a noble first attempt and I'm interested to see what the group's next moves are.