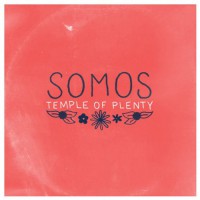 Somos' debut LP, Temple of Plenty, is fully stocked with swelling songs boasting huge choruses, non-stylistic vocals and prime production. It is an impressive debut that quickly entices its listeners. Sadly though, the initial shine dulls after repeated listens.

Temple of Plenty is a good record at heart. It's straightforward pop rock incorporating a punk-esque heaviness in the vein of Polar Bear Club. Somos consciously strays from standard pop-punk progressions, and uses their verses as building blocks to the choruses through single-note melodies. The vocals are thick and enveloped in maturity. Somos knows Temple of Plenty is pop-rock, but sustains maturity throughout.

Somos plays it a bit safe sonically, planting the album in a middle ground of various punk rock sub-genres, and making it the epitome of an accessible record.

There are praises to be given to Temple of Plenty. Each song has its own uniqueness while also staying cohesive to the album. It's energetic. The choruses are some of the best you'll hear, and stick around long after you've finished listening. It isn't a complete rip-off, and the songs will translate to a live setting fantastically. During the first few listens, Temple of Plenty seems like the best album ever. It's so glossy, so catchy, so entertaining. Yet, at a certain point, you start to get over that, and a bit of listener's fatigue sets in.

Due to Somos playing it safe, there aren't subtleties to be picked up on, alluring artistic choices or hidden aspects to be discovered, and these are important characteristics that take a record from good to great. Temple of Plenty lacks a certain amount of novelty to be pushed to the next level.

With that being said, you should still listen to Temple of Plenty. While it might not be absolutely fantastic or groundbreaking, it has its strengths, and in the end, it's a charming record that could be a bit more courageous.