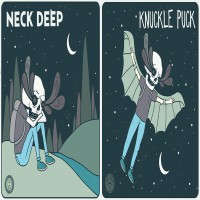 Over-saturation of a music scene/genre is a phenomena that occurs with nearly every popular (or once popular) style of music. Innumerable bands and artists emerge, all attempting to emulate a sound or style that is the current "trend", and encapsulate whatever attributes make that style or genre of music palatable in the first place. Pros and cons exist of course; more artists lead to more music and more choice in a genre that is overflowing. On the other hand, much of the time the quality is sub par (just because there are far more Subways around doesn't make ordering a Philly cheese-steak from this establishment the better choice over the mom and pop shop that might have taken awhile to discover). Still, this competition allows the better bands in the genre to rise to the top over the mound of imitators.

Knuckle Puck is part of this new pop punk revival. It seems that most pop punk revival aficionados would tell you that the buck stops with bands like The Story So Far, The Wonder Years, and up and comers also present on this split, Neck Deep. While Knuckle Puck only contributes two songs to the split, the undeniable promise these songs reveal for the band's future is apparent.

The vocals are snarling, angst-filled fare, but with a strained, almost haunting approach at times, which draws a small parallel in my mind to that of Jon Simmons of Balance and Composure. Lyrically, both songs cover relationships (its pop punk, c'mon) but are refreshingly free of the sophomoric attempts at poetry many pop punk bands attempt these days that date the lyrics and make them unrelatable to anybody who has surpassed their early/mid twenties. The closest it gets to questionable metaphorical cheesiness is from the chorus of "Fences" where vocalist Joe Taylor admits "I don't think about you anymore/Cause memories of you are like a treadmill/I'm not getting anywhere". The guitar work is great, with enough catchy riffs and melodies to keep the listener engaged and satisfied, but never going overboard as to distract from the vocals and structure. The rhythm section is solid as well, with variation and dynamics to match the energy present with the rest of the band.

The somber feeling flowing throughout the clean-picked beginning of "Gold Rush" soon gives way to the immediately memorable chorus of the song. The back and forth interplay between the subdued verses and the huge chorus along with the incredibly bouncy and melodic riffing is what will pull you in; the immediacy and all-encompassing nature of the vocal hooks and song writing prowess will make you stay.

"Fences" is a bit more straightforward, moving at a faster pace with octave-filled leads, transitioning to clean picked chords in the verses while the distorted rhythm crunches through palm-muted power chords. This offering is distinctly up tempo, and builds to a gang-vocal filled climax that is all too short, but will no doubt translate perfectly into a live setting.

Both "Gold Rush" and "Fences" may not tread brand new ground for the genre, but what Knuckle Puck does in this two song split is so head and shoulders above the mass of pop punk revival bands that to stop listening to these songs is an exercise in futility. They are that catchy. If this record is any indication of the quality of songs to come, Knuckle Puck have a bright future ahead, and will continue to rise above the current saturation of the pop punk genre.

While slightly more established than Knuckle Puck, Neck Deep's current explosion into the U.S. pop punk scene exemplifies the resuscitated popularity of pop punk. Forming in the U.K. in 2012, they signed with Hopeless Records in 2013 and are currently on their own headlining tour. Contributing two songs from their full length debut Wishful Thinking, "Crushing Grief (No Remedy)" fires off with an instantly catchy riff that is sure to move the crowd in a raucous live setting. The song is also the first single off the full length album and due to its unforgettable melody and tight riffing it's easy to see why it was chosen, despite the slightly contrived lyrics about betrayal in a relationship.

"Growing Pains" is a galloping, crooning love song, lyrically dealing with the weight of distance in a relationship. It is reminiscent of early 2000's pop punk; shades of Allister, Homegrown, and Midtown are readily apparent. The versatile guitar work and how it complements the melody of the verses and chorus is the most impressive part of the song, but it is slightly confusing why Neck Deep would choose this song for the split. There are songs on Wishful Thinking that might better display their song writing ability.

With both songs being culled from their debut record, the listener is able to ascertain exactly what these Englishmen are all about, and why they've ignited a spark within the scene. Neck Deep makes a solid showing here, and although "Growing Pains" isn't my first choice for a song to pull from the debut album, the band proves they deserve the buzz surrounding them with "Crushing Grief (No Remedy)" alone.

Go Big: The Story From Our Side