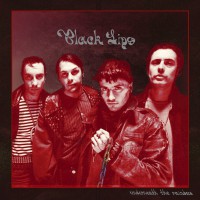 Building on the increasingly mature (if that's the right word) and melodic (again, a questionable term) work that made up Arabia Mountain, their last album, Black Lips have released another varied record of brilliant garage rock jams, with a couple of new tricks.

The album is a less scattered affair than their last, which felt like a collection of really great singles. Though producers once again rotate (Patrick Carney of The Black Keys co-produces a few tracks), a very swampy atmosphere permeates a lot of the songs and holds it all together, and man, is it swampy. "Funny" and "Do the Vibrate" are heavy and crude (the latter is about achieving orgasm by holding a vibrating phone to one's genitals), their low rock'n'roll covered in some kind of weed-haze syrup fog. There's no aping, but the influence of The Black Keys is present in "Boys in the Wood", a song so swampy-sounding, it's actually (probably) set in a swamp. There's a slow-burning bluesy riff that could be described as seductive were the lyrics not a bit Deliverance, which builds to a Stax-punk chorus with horns.

Breaking from the nastiness, there's some clear-eyed guitar pop in the form of "Smiling", which, though it feels like a sunny day, is about being a lowlife and getting in trouble with police, and "Make You Mine", which has the wonderful optimism of "Go Out and Get It" from Arabia Mountain. These two tunes in particular are just great. Ostensibly one paranoid song and one cheerful song, but weirdly melancholic, as well as infectious, catchy and danceable. They serve as a reminder that Black Lips (and, I guess, Brent Hinds, presumably from Mastadon, who co-writes "Make You Mine"?) are good songwriters, capable of producing evocative lyrics, little snapshots of lives, as well as being sleazy and bizarre. Speaking of which, "Funny" follows these tunes, bringing us back down to earth with the memorable couplet "we're riding, little lady, COME SUCK SOME MILK FROM MY TITTIES!".

The band has a country and southern rock influence coming into play on this record, and it exhibits itself on tracks like "I Don't Wanna Go Home", which has that "dungdongdungdong" rhythm you often see in, say, old Johnny Cash songs, but augmented by fuzz, and "Waiting", which adds in spaghetti western guitar licks. There's some punk moments on the album like "Dorner Party", which mixes more fuzz pedal action with weird outlaw country vocals in the verse, but building to a more Ramones-y chorus. "Dog Years", the closer, has an almost epic feel (for this band at least), with rumbling drums, guitars that might fit into a dull stadium rock song (but, like, good), and a spoken word section. Fuckin' spoken word section!

Overall, a good album. Not reinventing the wheel, and not living up to the very, very high bar their last album set, but repeating Black Lips' trick of drawing from older genres but somehow sounding fresh and fun.

Go Big: The Story From Our Side