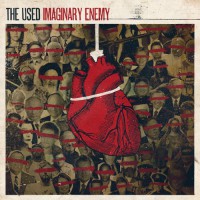 The Used are a polarizing band. Bert McCracken usually finds himself writing about love, drugs and a bunch of things you'd think an adult would be able to sift through a little better. No judgement there, because I always appreciated his spin on things and the fact that it shows how human McCracken is. Imaginary Enemy shifts things up a bit as their most political statement to date in a record that's divided into two facets. Firstly, it's about wondering how America's politics shaped the nation for the better and for the youth. Secondly, it's about the cliches that we may have outgrown and the typical angst of Bert. Either way, it's very mid-tempo and the most catchy in their catalog while providing enough fodder for the gents to tell more substantial stories than the earlier days allowed.

Songs like "Evolution" and "Cry" are crafted for radio and Hot Topic teens. The angsty and heartache elements are a bit heavy, even heavier than they usually shoot. "El-Oh-Vee-Ee" sums up how catchy and poppy The Used decide to go and make no mistake, they're pretty cool songs. Cheesy? Yes but again, songs that in measured doses, you wouldn't mind. They lay on this aspect of the album a bit thick at times but their political sounds do well to negate these lighter elements to The Used's music.

Electronic and synth-beats are thrown in amid the democratic anecdotes and it's AFI-influenced at times. These little snippets are very difficult to ignore and admittedly, don't always hit the mark. However, hearing the band's take on the political landscape come "A Song To Stifle Imperial Progress", "Imaginary Enemy" and "Generation Throwaway" play neatly off the band's inexorable poppy sound and brings forth an interesting narrative. Mainly because the band doesn't reinvent the wheel or show major steps of progression but as simple as their musicianship is, they nicely weave their deliberations into catchiness and a sound you'd expect to be hitting the MTV blogs in waves.

Their first two records were gritty enough and anthemic on their own to put a nice edge on pop-punk and were definitely tailored to the era when post-punk mixed with screamo had you jacked at Warped Tour. As emo as they were though, The Used lost the plot in recent years and struggled to grow musically, whether it be experimenting with their sound, or sticking to their basics. This album though bridges the gap a bit with a lot of old elements coming back as well as a hint of songwriting for the future - with more than a personal purpose. It's nothing evolutionary or mindblowing by the band's standards but as a fan of the old days, it's a step up from what they've done in their last couple gigs. Here's to hoping they strike the balance of the 2000s once more seeing that this offers us a glimmer of hope.