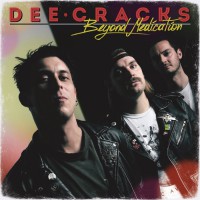 The influence of The Ramones has clearly been felt around the world for many years and DeeCRACKS are one of thousands of bands that have found themselves paying homage to the six bruddas who struck a handful of chords with so many people. However, these Austrians throw a bit of a curveball on their latest release, the band's second original long player, as they open up with a surf instrumental that took me completely by surprise. "Todo El Mundo EstÃ¡ Enamorado" (which approximately translates to something like "This Worldwide Love" according to the internet) is a punchy, riff-driven track that nicely sets up "Dead End Mission," a song that is much more in line with my expectations, i.e. 75-percent Ramones homage and 25-percent self-generated pop-punk goodness.

It's a fine line to walk really when such an iconic group forms the basis of what you form a band to do, but it's that 25 percent or so that makes the end result infinitely listenable or something to avoid like the plague: DeeCRACKS fall into the former category, and a lot of that is due to the vocals as much as anything else, as these help add something different as they are slightly more gruff than overtly sweet and tuneful. Beyond that, the songs are laced with Ramones-like moments including the hand-claps heard on "CharitÃ© Forever," simple chord structures that would make Johnny Ramone happy and some drumming that is Tommy Ramone to a tee.

It's inevitable that when listening to such a band that there will be constant nods to The Ramones and in the absence of any new material from that band then there's nothing wrong with a large dose of homage here and there. Therefore, in addition to the aforementioned hand-claps there's a wall of guitar on "Terminal Deadness" that remind me of a variety of tracks from the likes of Subterranean Jungle and Too Tough To Die specifically, and of course lighter moments where the prefix in pop-punk comes to the fore like on "Please Hold On" and "Summer's Gone." The final quality that endears this album to me is how so many of the choruses take just a couple of listens to stick and that makes subsequent listens more fun, as it makes listener participation much easier and more enjoyable.

All in all this is a damn fine album from the Austrian trio and it's really well produced, without sounding too slick and polished. I have to say that I love how strong the guitar is in the mix too and that's just how I like it, so this is a winner for me.