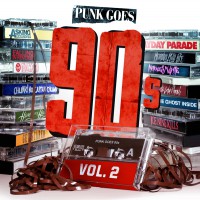 It's that time again. Another fearless moment in the world of pop-punk. Time to hold no punches. Time to unleash the fury.

That banter aside, it's a given that these Punk Goes... records have been lacking since the earliest releases but as a '90s kid, I looked towards this with hope. I sensed promise. After all, the '90s was a time for grunge, rap, alternative and punk -- which all were either in their prime or somewhat close. So with such an expansive array of fodder, you'd think Punk Goes '90s Vol.2 would capitalize right? Truth be told, they halfway do.

There are a few tracks on board that innovate their originals nicely. Ice Nine Kills, not surprisingly, delivers on Green Day's "Good Riddance (Time Of Your Life)." They did a neat job on Adele covers last year and this time around, they take the acoustic ballad for an edgier spin. A soaring punk riff imposes itself as heavy, rapid breakdowns build the track well, playing off the violin to great effect while not doing the cheap thing of blatantly copying Billy's vocals. That little shift was a big plus to me. The Ghost Inside then shines on a hardcore take of P.O.D's "Southtown" while Memphis May Fire shockingly delivers a pounding and abrasive "Interstate Love Song." Cue that Obama 'Not Bad' face. Seriously. Not bad at all.

But then come songs that feel like carbon copy rip-offs such as Motionless In White performing "Du Hast," a "My Own Worst Enemy" clone and a drab attempt at the Smashing Pumpkins' "Today" by Yellowcard. With barely any genuine craftsmanship and eye for cleverness, it's tough to stomach these bits and pieces as real music. Credit is due to the fact that this compilation features less whiny vocals and the influx of whatever-core bands that think screamo, pop-punk and heavy double kicking automatically make good covers but it doesn't help differentiate much from the tale of two cities that is Punk Goes 90s Vol.2.

I'm a '90s kid. I repeat. I grew up with ALL of these songs meaning something when I was young, cheesy and a dick. Nothing's changed with me. Nor with these songs. But when bands slaughter the covers like Fearless allows, I take offense. My advice: Teach these bands what 'punk' means and then from there, branch off. They can't fucking cover songs under the label of punk when they have ZERO idea of its essence. That's a big misnomer that Fearless should be held responsible for. Mix these bland imitations with a piss-poor attempt by Falling In Reverse covering "Gangsta's Paradise" and you're right back at square one wondering where's the brain work with these tunes.

I may be a bit generous in saying half the record's decent but I'll admit the songs that kick ass really do. Maybe Fearless Records needs to take their bands and have them do Punk Goes Punk because the majority of these bands aren't punk and when they try to cover punk or most sub-genres, you're left scratching your head. Sadly, the bright spots on this record can't offset the neither-here-nor-there aftertaste at album's end, but hey, if you're paying to see these kinds of bands at Warped Tour, you have my condolences. One drop of ink in the water, does what?