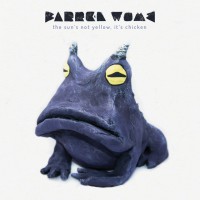 Barren Womb hail from Norway and like most of their European counterparts, they feed off a high degree of energy and it shows in their music. The Sun's Not Yellow, It's Chicken is as boisterous and as rabid as it gets while balancing so many hard-hitting genres, yet it manages to remain free of convolution. They succeed at the end of the day in doing just that while creating a beautiful nugget of chaos.

"Kill Hicks" is a feast of a track, ushering in jangly riffing on top of sharp, incessant soloing. For a band that usually is steeped in a more hardcore and metal realm, this was a pleasant surprise as they open with a more melodic hardcore take. In fact, a lot of the record is poised around hardcore meeting melodic punk, but a few post-hardcore subtleties are thrown in for good measure to once again emphasize how good a balancing act this duo really is. "Only Rain Man Doesn't Change" focuses on an intense pacing with shades of black metal and screamo protruding, giving more of the expected sound. Timo Silvola's drums fit smartly with Tony Gonzahl's guitars and shrieking vocals that label this two-man piece as a rabid beast as they carve out a really powerful sound.

"NÃ¡brÃ³k" and "Obi-Wan Chernobyl" loom as the more flashy tracks at hand through a highly fierce skate-punk sound. "Live Fast, Die" follows suit to call back to State Faults which ended 2013 on a great note for me and the comparisons are apparent. The manner in which gears are shifted to "Bong Aqua" as a woozy, melodic instrumental offers another cool dimension to the band that'll no doubt have you taking more than a swill. The second half of the record doesn't close as confidently as expected but Barren Womb is melodically feisty and filled with surprises. The screamo and metal influences aren't drowned out by their punk vibe and it augurs well, whether you came here looking for the next Deafheaven or Alcest like me, or for something that's not too fresh, but is still its own thing.