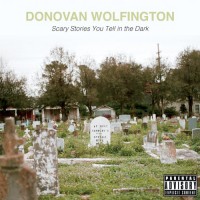 Did you get blindsided by Stop Breathing? I caught wind of it too late last year and couldn't slip it into my year-end list but thankfully, Donovan Wolfington offer a second chance at making it right. This time around, what they do with Scary Stories You Tell In The Dark is flesh out an EP that not only surpasses its predecessor but one which manages to create something binding several influences together to churn out a jarring, loud and evocative outlay. It glosses over bits and pieces of the old but mixes up new punk dimensions to give arguably their most assertive record.

There's much more of a harried vibe in these five tracks but it complements the essence of the album swimmingly. D-Wolf shift things up to create a more stressed ambiance and a much more aggressive stance than last year's output as seen with "Sleeping" and "Quitting". There's a blaring reduction in their melodic textures as they swap these for more grainy, rugged guitarwork - with flares and faster-riffing making up the majority of this new motif. Sure, it's distorted and noisy but what ups the ante and makes the record even more pleasant is the dynamic interplay of these shuffling guitars. From nifty solos to dominating riffs, the band sways from hardcore to punk effortlessly as they sacrifice the low-end to mid-tempo songs from Stop Breathing to harness a more compact and direct structure on Scary Stories You Tell In The Dark. Brave? Sure. But the gamble pays dividends as the brash style the band adopts leaves you ragged and wanting more.

Cue the Title Fight-esque "Alone" and you're left further surprised how effective their post-hardcore tribute unwinds. Cutting back on the female vocals, which were already a subtle part of their past M.O., killed off the Tigers Jaw-meets-Adventures thing they had going but still, there's quite a bit to appreciate when it comes to how relentless they charge at you. Furthermore, they never appear to be a band that tries too hard. This track signifies that the quintet wanted a record that doesn't let up with hardly any time to breathe. Well, they succeed! Mixed vocals, throaty yells to match musical swells and the pain emitting from the lyrics all play this dramatic up with ease. You can't shake the determination and belief in the vocals.

Donovan Wolfington seem better adjusted with this album and appear poised to expand their arsenal even more because this prods at the listener as experimental and a work in progress. It's a more expression-laden record and impresses with thicker basslines, an emphasis on guitar-fueled atmospheres and a prominent percussion set, all amid the disjointed rhythm that made the team appeal in the first place. Scary Stories You Tell In The Dark culminates as an open-ended spin on things which leaves you wondering how drastic their next change-of-gear will be...or if they're gonna be sticking to this sound. Either way, you'll be left giddy with anticipation because whether they stick to their old guns or fiddle with something new, this band rarely disappoints. This proves exactly that as it's a huge step forward in the right direction.

The Bare Minimum: Hit After Hit