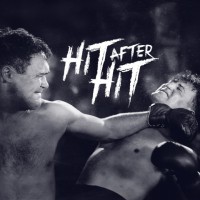 The Bare Minimum is a four-piece punk band that has been playing shows around the Ontario area for a few years now. I firmly and staunchly believe Ontario is one of the current greatest breeding grounds for new Punk anywhere, from The Steve Adamyk band in Ottawa to The Bare Minimum of Toronto. The group certainly resembles certain aspects of the genre's offerings emanating from the Ontario area, but they also have a clearly identifiable and unique brand all to their own. After releasing two EPs, they are releasing their first full-length, the ambitiously titled Hit After Hit.

This truly is a bold title for a relatively new band's debut, but the music within in it is impressive enough to possibly back of this claim. Obviously, the title is tongue in cheek, but there are enough solid pop hooks and melodies here to almost support the title. The sound is Punk, but they definitely draw a lot from some of the best of British pop music, something not unfamiliar to the location's other punk bands. The most obvious example is the influence of The Kinks on The Bare Minimum, as the latter takes influences from Ray Davies' knack for socially aware lyrics with a solid pop backing.

Obviously, The Bare Minimum is not the first to use punk for a soapbox political views and topical themes, this has existed almost since the beginning, but they have certainly managed to do something interesting and rare. Somehow, they ride the fine, almost seemingly impossible, line between a socially conscious punk record with something to say, and a purely fun punk record meant for nothing but enjoyment. So, whether you actually agree or not with the band's views or politics, there is enough fun and jams here for just about anyone to enjoy here.

The album actually works best when the band is being less outright politically, but that may very well be more of a matter of personal opinion. I've always favored politically neutral Punk overall–it just makes more sense to me–but by no means is there a lack of an audience for politically charged Punk. However, while relatively tamer songs like "Nerd at the Punk Show" do work better than, say, "Snake Charmer," the band is so utterly genuine and upfront about their beliefs it all ends up being simply admirable in the end.

Hit After Hit may not actually be hit after hit, but it is a thoroughly intelligent party album. Some songs may very well be better than others, but it only adds to the wonderful frenzy of the entire thing, and with eleven songs rushing pass in under a half hour, any defects are almost impossible to notice. The Bare Minimum is another clear example of why Ontario is one of the most consistently exciting locations for Punk. Yes, it may be slicker than many lo-fi punks would prefer, and this is a very ambitious debut, but it's one that succeeds at just about every corner.

Donovan Wolfington: Scary Stories You Tell In The Dark [EP]