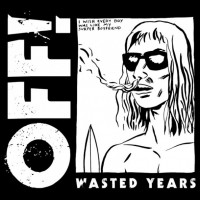 Probably because OFF!'s music is so Spartan, when commenting on their output, people often reduce the band down to a single attribute. They rock. They're energetic. Keith Morris is angry. While all those descriptions are accurate, on their third LP, Wasted Years, OFF! reveals that despite their thunderous smashing, there is a great deal of nuance hidden between the shouted lyrics and roaring guitars.

To be fair, Morris is angry here- maybe the angriest that's he's ever been. On "Void you out," he doesn't just want to beat up or kill someone, he wants to erase that person from existence. On "Mr. Useless," he's probably attacking former bandmates with "The fever has broken! I want my money back!"

But, while there is a great deal of anger, there's not just anger here. If you've ever seen an interview with Morris, when speaking, he'll frequently wander off topic and suddenly start speaking in great detail about a band that he loves, or a kind of burrito that he loves, or a movie that he loves, orâ¦ well, any number of things that he loves. If he stumbles over a phase that he likes, he suddenly start engaing in word play, amusing himself with how certain words work in conjunction. That is to say, despite that Morris might be known as an angry guy, through that ire is a sense of child-like whimsy- a delight in the mere ability to be delighted. Morris might be pissed off, but he has fun, too.

That aspect comes through more strongly on Wasted Years than any previous Morris release. Whe he snaps, "You're a walking punchlineâ¦ and the joke's on YOU!" you can tell it's delivered with a wry smile. When he screams out "Jackass!" on "Over Our Heads," he delivers the word with a certain love of the word itself- savoring how fun it can be to simply call someone a jackass, regardless of who they are. The reason why so many other punk bands become tiresome across their albums is because they are mad and have no other level. No one wants to hang out with a sourpuss over the course of two sides of a record. The reason why OFF! becomes more invigorating with each track is because it's just so damn fun to be in Morris' world where government atrocities are abutted next to tales from the last pool party, and even more, Morris shows the fun side of being angry. There's spite here, and it's delicious.

Wasted Years feels like the third part of a trilogy. The First Four EPs, established the OFF! template- 90 second songs built around the classic punk format and boiled down tot heir essence. OFF!, the second LP, went a step further, cutting songs into less than the necessary parts, making the album more a collection of berserk fragments than anything else. Wasted Years completes the concept by blowing the songs up into their most complex arrangements. Granted, the longest song is 2:15, but for OFF!, that's an opus.

Guitarist Dimitri Coats earns his per diem here. Of course, each track is loaded with short, hard, catcy riffs. But, where as the band used to get in, smash the riff to pieces, and get out, Coats becomes more adventurous, in some ways, mirroring Morris' wandering whimsy. Tunes here often have three parts, with Coats establishing a theme, then suddenly, dropping into half time to build tension, only to rip everything apart at the end. What could have seemed overblown become tactically precise because Coats knows exactly how long of an attention span he has for each concept, maximizing a riff's duration before switching to the next thing, giving the listener time to appreciate the craft, but continually keeping him or her on the toes, the whole time. Then, when bassist Steve McDonald supplements Coats' motor city guitar with rapid, but thick bass, mirroring him note for note, the chords become massive- blunt and precise at the same time. Taking the cue, drummer Mario Rubalcaba has fun with the tempo, suddenly slowing the band down when you expect them to speed up, and then, out of nowhere going into overdrive.

This underlines what seems to the album's main theme. This music is from the gut. But, while it may be instinctual, it betrays fundamental thoughts everyone has. Anger and happiness aren't always separate, and sometimes, when they mix, both are more potent. This music might be short and there might not be a whole lot of advanced chord changes, but, from a conceptual standpoint, it's about as complex as the recorded sound gets.

Sleeping Weather: I Was Just On My Way Out