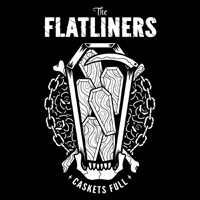 The Flatliners have progressed quite a bit since their ska-punk days. They promptly released the Caskets Full EP after they released their fourth full length Dead Language in 2013. The Caskets Full EP has three tracks on it. The A-side has the song "Caskets Full," which is definitely one of the most rockin' tunes on Dead Language. Those back-up vocals add so much to that song and the guitar riff does, too. However, this EP has two other golden nuggets on the B-side that should really be given more attention.

The first song on this side, which is called "Wynford Bridge," seems like it's a song that just didn't make the cut to get on Dead Language. And that's too bad because it's a great song. It too, has a great main guitar riff and exemplifies The Flatliners current sound quite well. Compared to some of the songs that actually made it onto Dead Language, this song absolutely stands out. Surprisingly, it's a very politically charged song if you take a look at the lyrics: "Government officials got the itch/String and fingers pointed at the kids/ A loaded missile ain't say they miss you/Can you tell me what's the point of all of this?" Granted, "Wynford Bridge" probably would not have fit very well with the other songs on the album, but it should have been put on its own single. It's that good.

The other song on the B-side is a cover of Tony Sly's (RIP) acoustic song "Fireball," which was originally on his album 12 Song Program. This cover was also The Flatliners' contribution to The Songs of Tony Sly: A Tribute compilation that was released last year. The original recording of course is an acoustic song that is accompanied by cellos and violins. The Flatliners' on the other hand, reshaped this song and made it their own. They made "Fireball" into a song that probably could have fit on Dead Language or even Cavalcade for that matter. Though this is a distorted guitar-heavy cover, The Flatliners pulled the reigns back on their usual aggression in their vocals, and made them gentler to keep the mood of the song fairly similar to Tony Sly's version.

We Live In Trenches: Life Crisis