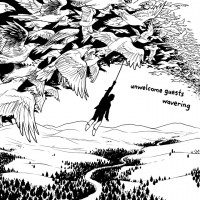 Let's do a show of hands on how many people like unwelcome guests, those people who drop in unannounced and get in the way of what you were trying to do? Hmm, I was right, not many of you. Now how many of you like Unwelcome Guests, the Buffalo, NY-based band? Ok, maybe not as many hands there as perhaps I'd like to see. Well, let me tell you something about the band's sophomore album, released by the excellent Dirt Cult Records, and see if I can pique your interest so that a second round will see more hands in the air.

First up, it's pretty hard to pigeonhole Unwelcome Guests; they're not exactly punk, they're not exactly alternative and they're not exactly Americana; they're well â¦.. they're just Unwelcome Guests and Unwelcome Guests will use whatever means necessary to get their music across. From start to finish Unwelcome Guests refuse to get trapped into sounding any one particular way and as such the album refuses to get bogged down as it shifts this way and that during the ten tracks. The fact that a band can be diverse, although not overly so, without it seeming disjointed is always a plus point to me, and at the end of each play of Wavering I feel as if I've been on a bit of a journey which has included a number of slight tangential twists and turns without ever losing focus of the required destination. You can imagine the scene when the band formed, with four guys getting together with the aim of just having a great time rocking out, no set guidelines, just a love of music -- an approach I applaud.

For all that flattery, Unwelcome Guests are not unique and they'd be the last to even suggest such a thing but I find all of the tracks on Wavering to be extremely easy to take on board, and this is probably because I hear bits and pieces that bring to mind the likes of Husker Du, Samiam, Stiff Little Fingers and also the much lesser known, but personal favourites of mine, The Abs. Now any band that makes me think of that quartet is ok in my book and I don't bandy around such names without giving it some thought as they're important bands in my life. Having read a bit about Unwelcome Guests, the one band that does keep cropping up as a comparison are the Gin Blossoms. I'm not au fait with much of that band's output but I certainly hear a vocal similarity on songs like "Flood" and "Old Tattered Flag" from what I do know but beyond that I couldn't really comment on the validity of such claims.

Bands like Unwelcome Guests are the reason why I love music so much. âDiscovering' anything that makes me get instantly excited is a wonderful sensation and that is how I felt when I first heard Wavering. I've since listened to the band's debut album Don't Go Swimming and that shows that the follow up is no fluke, these guys really know what they're doing. Wavering is currently in my top five records of the year.

Hopefully if I requested another show of hands in a couple of weeks re: who likes Unwelcome Guests, the response would be a bit more overwhelming. It should be.