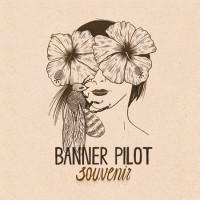 Just about every review and article dealing with Minnesota's Banner Pilot always mentions how their sound never changes. How they write and record the same couple of tunes over and over again. Anyone who is actually familiar with the band knows this to be false. Banner Pilot's songwriting has changed dramatically since 2006's Pass the Poison e.p. and the newly released Souvenir proves it. However, is this necessarily a good thing? Would they be better if they kept on churning out fast, gritty, catchy punk songs reminiscent to the ashes Rivethead left in its wake?

Souvenir starts off with the already released song "Modern Shakes", which has a vibe in the vein of their last album, Heart Beats Pacific. This formula of somewhat slowed down verses/super catchy and punchy choruses/lyrics about being alone and (usually) drinking is apparent throughout Souvenir, but the new album just seems to have something that the last one was missing. Instead of buzzing guitars accompanied by Nick Johnson's growl to a rapid tempo, songs like "Effigy" and "Dead Tracks" begin with heavy palm-muted guitars with more melodic vocals. Then, to absolutely everybody's surprise, a clean chorus with a nice hook comes around to change things up. Yes, this is very predictable songwriting, but that's just because it works. Maybe it's just this stupid reviewer's opinion, but the chorus seems to sound better and equally mean more to the listener when it grabs you by the balls following a calmer and coherent verse.

The new record works extremely well as the kind of album you have to listen to all the way through every time. It's coherent and each song works off of another song. Sure, instant fan favorite tracks are there, like "Dead Tracks", "Hold Fast", and "Springless", but the band has finally released an album that can be best understood and enjoyed in its entirety. Souvenir is certainly no random collection of songs like 2008's Resignation Day. Plus, the recording quality sounds better than anything they've ever released.

Every song seems to stand out more than the last. Bassist/co-songwriter Nate Gangelhoff has already stated that "I think the attitude of âLet's keep trying to make this better' paid off." I would have to agree with him. For fans of Banner Pilot, Souvenir is the expected sequel to Heart Beats Pacific, but a little slower (and arguably better) than its predecessor. For people who have never heard of the band, I'd recommend picking this up. However, don't judge Banner Pilot's sound on this one album alone. Just like almost every great band that ever existed, they are consistently evolving and changing their overall sound. Banner Pilot wouldn't be able to keep writing such good songs if they were held to the constraints of their earlier, heavier pure punk style. Bands are like people. They grow up and change. Not necessarily for better or for worse, they just end up different. Luckily for Banner Pilot, this different sound is just as good as the old songs that originally made them stand out in the first place.