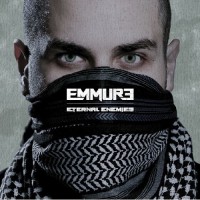 Emmure's new full-length Eternal Enemies has come under a lot of media fire, especially for an album that sounds like a continuation of the nu-metal/rap rock bands that were big in the late 1990s and early 2000s. The perfect example of this comparison is the song "Nemesis." The guitars are loud and heavy and the drums are insanely fast, all fairly good parts of the song until we get to the vocals. The vocalist takes it upon himself to perform three very different parts. First, he sings the deep roar-like vocals that a lot of death metal bands typically use and then he switches screaming. The third kind of vocals he performs is a sort of "talking" during the breakdown of the song and to be quite frank it's a little reminiscent of "Break Stuff" by Limp Bizkit (there are even record scratching sound effects in the song "E"). The switching between three kinds of vocals is very distracting to listen to. And this goes on for the majority of the album. Also, though the guitars are really heavy and extremely distorted, it's hard to tell the difference between guitar riff in one song from another. Musically, nothing is really that outstandingly original. The same goes for the lyrics, like in the song "Most Hated," where the beginning lyrics are: "This is what I'm all about/No regrets, no fuckin' doubts/ So you better watch your fuckin' mouth/Before I put you on the fuckin' groundâ¦BITCH!"

Now let's address the legal action that has been associated with this record. In short, Emmure was being threatened with a lawsuit by their former guitarist if the band didn't change the name of the first song of Eternal Enemies, which was called "Bring a Gun to School." They have since changed the title of this track to "Untitled."

First of all, its not much of song, its more of an introduction to the whole album. It's only one minute and forty seconds long and the first forty or so seconds is just the guitar playing a note or two that continuously change pitch and there are recordings of people panicking on the phone with what I assume to be police phone operators. After the forty or so seconds of what seems to just be chaotic audio ends, in comes the rest of the band and the vocals, with lyrics that include: "Holy fuckin' shit/I'm having too much fun/ Killing everyone." Real original, no?

Is this song in good taste? No. Is it trying to be shocking? Yes. But doesn't punk rock and music in general always try to spark reaction out of the audience? The public, President George H.W. Bush and the neo-fascist/anti-free speech group the P.M.R.C. were absolutely outraged over Body Count's now-classic "Cop Killer." How can anyone in the punk community forget that Sid Vicious would wear a t-shirt with a swastika on it? Or Leftover Crack's song "Rock the 40 Oz?" Not only is that song about the Columbine shooting and recorded just a short time after the tragedy, but even the music video shows upside down American flags and the blowing up of New York (granted, it was shot and recorded pre-9/11).

Do you see the hypocrisy here? I don't advocate killing or any of the other looked down upon/illegal behavior that I've mentioned, but to threaten a band that you aren't even in anymore with a lawsuit over the title of a song that's supposed to be shocking in the first place? Really?! What ever happened to "The Filth and the Fury!"?

And by the way, changing the name to "Untitled" won't really do much. Because of this controversy, everyone knows what the name of the track is supposed to or was supposed to be. Congratulations, nothing has been accomplished!