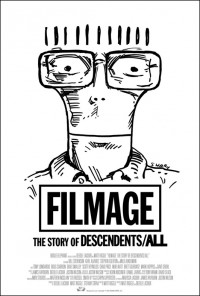 Filmage: The Story of Descendents/All (2013)

Last night I was at a screening of Filmage, the Descendents documentary directed by Matt Riggle, at Cinema Arts Centre in Huntington, NY. Riggle was in attendance, did a Q&A after the film, and I got to chat with him for a few minutes at the end of the night (hoping to trade a pretty good Stephen Egerton story for a promo poster, which, unfortunately, had all already been given out - ah well).

Filmage knows who its audience is and doesn't really even try to expand beyond those boundaries: Descendents fans. Now, my hope is that there are enough Descendents fans to sustain this film and have made it worthwhile to have been made in the first place.

The movie is an opportunity for fans to hang out with the boys, and we really DO get to hang out with the boys as Riggle was able to get everyone that had ever been in the Descendents/All family tree into the film with two exceptions (one died a few years back and the other simply declined to participate). We also get to hang out with other musicians, most of whom the audience will know, and many of whom reached levels of success far beyond anything the Descendents themselves ever achieved, gush about a band that any fan knows were really something special. And, of course, we get to hang out with what all brought us here in the first place - the music. There are tons of Descendents and All songs strewn throughout the movie, both in its original recorded form as well as footage from live shows old and new (and - in some cases - ancient). The soundtrack itself makes for an excellent Descendents/All hits package. But this is not a concert film by any means.

However, even the most politically hardened person can still relate to the shared human emotion of having your heart broken....or having that girl you have a crush on virtually ignore your existence....or perhaps consider that for all of our punk rock stances and supposed contempt for societal norms, maybe settling down with someone we love isn't such a bad choice.

Another interesting aspect of the film was the discussion of All. A band often and unfairly seen as simply a continuation of the Descendents with a different name and different singers. Of course, no one other than the band themselves are to blame for that perception. The last Descendents record before the initial break-up around '87 was called Al", and you had 75% of the final (and continuing) line-up moving laterally over to All.


Watching the movie, I was, in some ways, reminded of Anvil: The Story of Anvil, another fairly recent rock doc that was both commercially successful and critically praised. That film was centered around a metal band who were no doubt legitimately influential in their earlier days and were known to metal heads around the globe, but who, over the past 20 years or so had continued onward despite wallowing in almost total obscurity, probably only selling a few hundred of whatever their newest record was and playing in virtually empty clubs night after night.

That film had to do more - MUCH more - than simply try to appeal to the Anvil fan base. That movie was not so much a documentary/history lesson about the band (in fact - there's relatively little Anvil music in that film) - but rather told a story that anyone with a passion and a dream could relate to. It was about two men, lifelong friends, who never gave up their dreams of playing music together. It was an uplifting story that you could connect with even if you had never heard of the band Anvil or could care less about their music.

Filmage is NOT that type of film. There is not much in the way of a larger story.....not even in the sense of punk rock's place in the world and the influence it's had on culture. It's simply the story about a bunch of good natured punk rock music geeks who wrote some of the best songs in history.

The Priceduifkes: Why Not [EP]