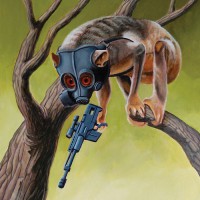 How many of us are waiting on a new Sunny Day Real Estate record? In 2009, we were duped and still, I bet there's quite a few. While it doesn't look like there's much promise to harp on, at least the band shells out a Record Day treat on a Circa Survive split which serves to reignite those small glimmers of hope for fans of the emo patriarchs. The Circa Survive song feels more like a formality than anything else, not because of its mediocre quality, but because Jeremy Enigk steers forward one of the biggest teases so far in 2014. Sadly, with no follow-up to come, it's also one of the biggest let downs.

First off, the bad news. Circa Survive hash out "Bad Heart" which has become a typical Anthony Green "experimental" track -- something that attempts to be melodic and trendy but falls nothing short of being a trite lullaby. You can tell from his solo work and of course, Violent Waves, which lost itself compared to their 2005/6 work. Ironically, most of his music lately lacks heart. This musical direction is something that bands like Tides of Man, Dance Gavin Dance and A Lot Like Birds toy with but when Green does it, it just comes off pretentious, bland and stripped down as musically elementary and a tad amateur. Green's lax vocals display zero emotion and minimal effort so if you're a Saosin fan when he links back up in May to tour, I'd be skeptical. There's no connectivity, affirmation or belief in his voice.

The astounding thing is that SDRE pretty much wipes out any aftertaste of Circa Survive with another majestic little nugget in "Lipton Witch." Intricate guitar work builds an emo, post-hardcore and overall '90s rock tone just as you'd expect, on top of tight kit work, to give the focused SDRE that shone on Diary. In fact, this song digs the way "Seven" did when released. It's a most welcomed opposite to "Bad Heart" in its outpouring of emotion, which feels character-driven by Enigk but still isn't offset too much by said emotional weight. This is seen particularly with the multi-layered vocals which are subtly placed and not overdone. They come off focused as mentioned prior, but still there's the freedom and flow of the old guard in their music. Enigk's timing and delivery is as organic as can be and he doesn't miss a beat. No one does on this song. You couldn't have asked for a more perfect track.

2009's reunion yielded this lone item and what a hidden gem it proves to be. Still, it leaves fans wondering what the fuck happened. As stagnant as things seem though, fate has a way of making things happen at the right time and with Circa's Brendan Ekstrom catching a show during this reunion and planting seeds of a split into action, well let's just say that having to stomach Green was totally worth the SDRE trip. Let's hope Easter ends with one more resurrection and that Enigk springs the troops into action. Since 2000 and The Rising Tide, we've been waiting. We still are. Answer our prayers.