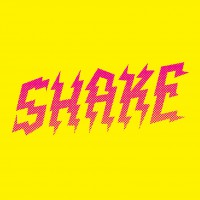 The biggest issues with Diamond Youth's previous EP, Orange: That most of the songs sounded rather similar and that opener "Cannonball" was noticeably better than the rest of the record, have both been corrected on Shake, their followup, arriving only a little over a year later. The songs on Shake are consistently great and stylistically varied enough to suggest that it might finally be time for a Diamond Youth full-length.

"Red Water" begins with a cool little surf-rock lick before the onslaught of loud rock guitars sets in. The production is massive; The guitars slice and the rhythm section booms. In the past, frontman Justin Gilman's falsetto vocals have recalled Matthew Bellamy of Muse, but he projects a much more Josh Homme vibe throughout Shake's running time. Queens of the Stone Age are perhaps a good reference point for the direction Diamond Youth seems to be heading, with most tracks on Shake coming across both aggressive and danceable in equal measure. "Can't Shake the Feeling" and the largely bass-driven "Follow Through" in particular show heavy Songs for the Deaf influence.

These tracks might be a little too slick for some of the group's early supporters, but the record also includes "Maryland Ice Cream," which, clocking in at a particularly furious and speedy forty-nine seconds is unquestionably the punkest song the group has recorded to date and reminds listeners that Diamond Youth was originally formed as a side project by members of Terror and Trapped Under Ice.

In the past Diamond Youth have, perhaps not entirely unfairly, been lumped into the "90s revival" scene, with bands like Title Fight, Basement and Daylight. However, Shake should be the record that pushes the group above and beyond those confines. This is radio-rock done right. Fans of Weezer, Foo Fighters and the aforementioned Queens of the Stone Age should take note, as Diamond Youth may soon be invading your airwaves alongside those bands. This a well-written, diverse and thoroughly enjoyable hook-laden rock record that will stay with you long after its runtime is over. Let's hope they get around to making a full-length sooner than later.