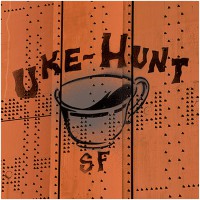 Spike Slawson of Swingin' Utters and Me First and the Gimme Gimme's has created one of Fat Wreck Chords' most unique releases called The Prettiest Star EP. This single is the first release from his new cover band called Uke-Hunt, which relies heavily on his vocals and ukulele skills.

The two songs that have been covered on this EP are "The Prettiest Star" by David Bowie and "Ben" by Michael Jackson. Compared to the original version of "The Prettiest Star," Uke-Hunt's version is fairly similar. It seems like the band kept it in the same key as the original and mimicked the backing vocals quite well. Slawson definitely shows how good his vocal range is in this song. They even kept the saxophones, but took out the drums and replaced them with (what I believe to be) a tambourine. On the B-side of the The Prettiest Star EP is a cover of Michael Jackson's "Ben," where Slawson actually translated the acoustic guitar riff from the original to ukulele and it works really well. They kept the tempo relatively the same and again Slawson's vocals are great on this track.

Are the songs on The Prettiest Star EP something that you are going to want to mosh to at a live performance? Probably not. What's cool about Uke-Hunt in general is that it's "out of the blue," random, and different. And that in itself seems to be what gives this EP some of its charm.