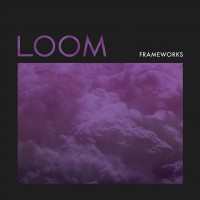 I love it when a band comes at you with a bold, daring, zero-fucks-given attitude. Frameworks is just that. With Gainesville churning out pop-punk, indie and emo acts, it's a nice slap in the face for what Loom does. It incorporates elements of post-hardcore and screamo/skramz together, promoting Frameworks' own brand of melody-driven hardcore that's as chilling and destitute as can be, but so powerful and dramatic in their own noisy way. Fans of Comadre, Barren Womb and Life In Vacuum would definitely flock to this given that it's more raw, edgier, passionate and cuts loose in a heavier context. Highly recommended.

The musicianship they construct needs to be mentioned first because it's direct yet intricate, melodic yet chaotic and informs the hardcore genre deeply. Most of all, it's highly diverse. Jack Shirley helms this recording (production) and he's worked on Deafheaven, Joyce Manor and Comadre to name a few. His signature is annotated all over the album because the ferocity is obvious and screams at you. Luke Pate addresses the listener with rage a la Departures and The Saddest Landscape -- more throaty than shrill -- but never loses the aggressive nature of his lyrics or their sound. Loom opens up a la We Were Promised Jetpacks before taking the brunt of Pate's vocals on and amplifying the record's abrasive sound. The collision of sounds are unexpected at times with a multitude of varying tempos that all tread on incessant pounding double-kicking (by Matthew Horner) and frenetic riffing (by Cory Fischer and Andy Nicholl). Massive, demanding basslines help the foundation even more and as they range from twinkly tones to distorted sonic outputs to hazier, punishing fits of anger (as heard on "True Wealth"), Frameworks never manage to lose their expressiveness. It's coherent despite so many conflicting sounds -- and the fact that this avoids any disjoint in the record is something to be commended.

There's a lot to take in here. "Splinters" is such a Pianos Become The Teeth homage so new wave fans can have their fill but old-schoolers can soak in The Mars Volta instrumentation also, particularly on the labors of the swift guitars. Each song's precision seems to be countered by something new. These every-so-often change-ups can throw the new listener off a bit but again, they don't. What's done though is a harmonized conglomeration of noise and melody as if three different bands were in the production room. The guitars captivate along with the beat patterns and constant use of cymbals, which, oddly enough, works in Loom's favor, letting you absorb the full experience of the amazing instrumentation. Weird time-signatures rear their heads throughout the duration of the record, but they continue to hold an interesting path through each song. Pate's words in his own anguish also boil down as thoughtfully and intelligently conceived with airs of regret and frustration kicking in. This is emotion that's well thought out.

Varying tempos and the aforementioned tight musicianship play off every emotion struck by the lulling chords, the loud musical structures and the lyrics which paint every haunting picture that was otherwise left out. Safe to say, Frameworks are a complete package. Thought-provoking. Evocative. Mosh-able. Thrashy to encourage slam dancing and stage diving. Fists in the air too. It's a visceral match for what you keep bottled up inside -- pound-for-pound a heavyweight on intensity and emotion. While nothing too original, Loom still acts as its own thing. It sets the stage hopefully for more amazing albums to come. I can't wait. Sink your teeth into this. You won't regret it.