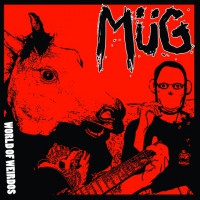 MÃ¼g's debut album, Stacked, which came out in 2013 was a pretty good record from an English band with a hankering for melodic punk rock in the vein of Bad Religion and the like, with ooohs and aaahs finding their way into a number of catchy songs, some of which were pretty good ("Tigers and Bears" standing out more than most to me). A year on finds the band releasing a three track seven inch and the initial thought that crossed my mind on listening to this is how much beefier the recording has turned out, which has consequently given the band a bit more oomph to their sound.

Listening to the first song, "World of Weirdos", I feel like the band has progressed not only in the recording (which, incidentally, is done by themselves) but also in the sound being less generic and a bit more individual. Rather than coming across like a bunch of Bad Religion wannabes (admittedly Stacked wasn't all that way, but there were enough nods in that direction to note it here), I'm reminded of Las Vegas's Surrounded by Thieves and New Cold War, two groups that capture both power and melody in what they do.

"World of Weirdos" is the strongest of the three songs but "Fingers Crossed" and "Signs of Life" both have enough quality about them to hint at the next MÃ¼g album, if there is to be one, being a good couple of steps up the learning curve. The other plus point is that the three tracks don't blend into each other with enough variety being heard to keep them separated. That is more than enough to keep the record fresh on subsequent plays.

It is always easy to focus on the more well-known bands both in the UK, USA and on the European mainland so it's good to hear bands like MÃ¼g, who are eventually able to find their own feet and be able to add something worthwhile to the melodic punk landscape. It would be good if their audience could grow a bit and show them it's worth doing what they're doing, as a new album should be next in their plans.

The single is also available via Bandcamp (http://mugrocks.bandcamp.com/album/world-of-weirdos) for not much money at all.