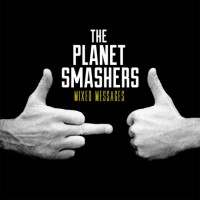 It seems like 2014 is shaping up to be an amazing year for ska with an abundance of stellar new releases properly representing the genre. Bands new and old are delivering some great records that might have you thinking you somehow woke up in a time vortex that took you back in time about a decade. The Planet Smashers, from the land of Skanada, show us that they can still deliver the goods with their latest album and their first in 3 years.

Although there are definitely some high paced songs on the record overall the mood is somewhat mellow and I rather enjoyed it. Sometimes it's nice to find some modern ska that isn't constantly played at neck break speed but isn't quite traditional ska. Not that I don't enjoy a good fast paced dance session but every now and again I could use a break. Perhaps break out the lounge chair and enjoy a good beer while I am at it.

I also want to mention I had an interesting notion while listening to the release. Perhaps if the band were to alter the track order slightly we could get an entirely different vibe altogether. There is close to an even split, well about as even as you can get with an odd number of tracks, of fast and slow songs on the album. If the band opened up record with all the faster songs and closed with the slower ones you could easily change how people digest the album. This suggestion actually would play out really well on vinyl records especially when you think about it.

For the record, the only bad thing I can say about this record is that the 8 bit intro on "scientific explanation" was such a tease. Just give me a whole 8 bit song guys! You know you want it as much as I do.

All theories on track listing aside, Mixed Messages is proof that after a little over 2 decades of making music there are bands that can still put out a quality record. I hate using the word fun to describe a record because sometimes it feels condescending to the band but The Planet Smashers really did craft a fun record and I mean that in the best way possible. It's an album definitely worth your hard earned money. I say you should pick it up (rimshot) sooner rather than later.