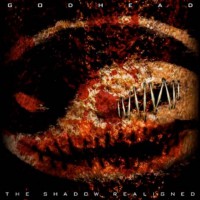 The career of an artist can be defined through many planes. The complete discography, the in-depth interview, the biography, even the VH1 "Behind the Music" feature. Being re-examined by others, twisting and torturing it to match descriptions of what it meant to them, through the remix album can be one of the most endearing and complicated mediums of worship. Godhead's latest release The Shadow Realigned features 17 tracks of electronic goth-rock worship. Manipulated and contorted in a way that refocuses the bands greatest achievement, 2003's hit The Shadow Line, under a most acute microscope.

Released on April 29th of this year, consisting of 14 remixes and three unreleased tracks, the original "To Heal" and covers by Kiss and Depeche Mode, this is an expansive and twisted look into the band's finest work. Much like their contemporaries Nine Inch Nails, Godhead has acquired the skills of many talented artists, all putting forth a unique take on the song of their choice. Unlike NIN on Further Down The Spiral and Broken, this record remains relatively stable in structure and style. This is far from the industrial barrage of noise Trent Reznor and friends calculated over 20 years ago.

The Dark Moon remix of "Inside Your World" brings a heavier, atmospheric, nu-metal feel to the semi-acoustic ballad. Fellow industrial-glam rockers Psyclon Nine bring an even grittier feel to the pop hit "Trapped in Your Lies." Drowning out many of the metallic riffs found in the original to the background, and heavily filling the space with EDM bass and drum hits. Layering the whole thing with reverb and cavernous effects gives the feeling of being in an ancient monastery rather than trapped beneath the narrow city streets. The Tool-esque "Hey You" is covered in a shimmery layer of bright lights with Ginormous's remix. The heavy back beat remains, while guitars in this instance are completely removed. Synths flow freely in and out through the song, carrying the melody and providing the atmosphere, creating a trip-hopped out take on a once extremely heavy rock song.

Cleanliness is next to godliness they say. "Godhead is the nature of god, for us that's music" says Godhead songwriter and vocalist Jason C. Miller. The essence of god is expressed through oneself, for those who believe in such a thing. For the artists on this album, to imitate, recreate and redesign these songs of musical worship is for them to worship the purest form of the artist themselves. Godhead should feel honored that their songs be remixed in such high fashion, with such original intensity and often cleanliness quite close to the originals. The Depeche Mode cover rules, while the Kiss cover can be difficult to listen to. The unreleased original "To Heal" reminds fans why the melodic, dark and mid-tempo power of Godhead never faded. Serious fans prepare for an industrial electronic journey down the rabbit hole, one that will make you reconsider how you view your favorite pain-soaked album.