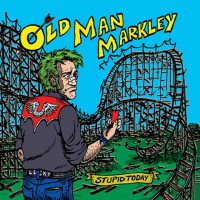 Singles are a great way to be introduced to a band. Whether it's buying them digitally (yawn) or getting various shades of colored vinyl (fun!), singles harken back to a simpler time when bands would throw out a couple songs and then hit the road to garner new fans. As Old Man Markley gears up for yet another US tour, the bluegrass/punk band has two new songs in the form of their latest Fat Wreck release, Stupid Today.

"Stupid Today" starts with a plaintive violin, but soon kicks into a swift shuffle. Detailing the "ups and downs of the relationship roller coaster," (according to stand up bassist Joey Garibaldi) guitarist/vocalist Johnny Carey's voice will be stuck in your head as he sings about the emotional tug of war that can happen in any relationship. "I got you in my head/You got me in the palm of your head" and "I'm so sick of this ride/But I can't stay away" will ring true to anyone that's bought that ticket and taken that ride. The band claims Fat Mike refers to it as their "Burt Bacharach song" â that is, if Bacharach worked with a washboard and autoharp.

In 2010, the band covered Screeching Weasel's "The Science of Myth" as the b-side for their debut single, "For Better For Worse". No strangers to punk covers, the men and women of Old Man Markley took a chance and covered not only a classic song, but one written and performed by their boss, Fat Wreck head honcho Fat Mike. Originally appearing on the classic 1992 release, Punk in Drublic, "Reeko" sounds nothing like the original. Eschewing the reggae beat and upstrokes in favor of banjo and violin, OMM take the song and make it their own. Speeding up the song in the beginning, and slowing it down at the end, their sweet vocal harmonies really shine on the track, giving it their signature sound. NOFX fans will undoubtedly appreciate the nod to "Perfect Government" in the song's breakdown.

Cover songs can be hit or miss. When included on an album, they can just as easily be viewed as filler as they can be fun. Many bands stay true to the original, while others will take a familiar tune and warp it into something all their own. Count Old Man Markley among the latter.