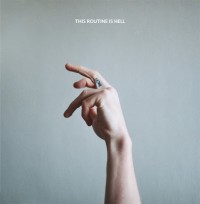 This Routine is Hell

I saw This Routine is Hell live, billed as sounding like early Ceremony, so I was a bit surprised when they appeared to be a screamo/skramz band (had lots of hair, opened with a song in 3/4), and then further confused when it turned out they weren't. I'm an idiot, but what I do know is that they were great, and their singer said the record was free online, so I went and got it and it's even better. Like, it's really, really good. Should have bought a god-damn t-shirt.

You can pick out various aspects to This Routine is Hell's music- If you listen you can hear the chopping and slashing of early 80s American hardcore. There's the cleanliness and lightness of melodic hardcore, too. There's a screamo/skramz element, but the music's not screamo. There's emotion and the poetryof skramz, guitars that delve into both beauty and dissonance, often many parts to each song. But, it doesn't have the sudden, blindsiding changes of Pianos Become the Teeth and the like. It utilises aspects of the genre but the songs feel straightforward, striking like a sledgehammer rather than being all over the place. In this respect one could make a comparison to early Ceremony after all. Dissonance, super fast bits, slow angry bits, but all fitting together to make fantastic blasts of hardcore punk. The production, by Kurt Ballou, helps with this.

The album opens up with the pissed waltz of "Gather Your Stones" which serves as an introduction before the thumping drums and glowering bass that open "Nostalgia" appear. This in turn gives way to that song's sharp riff, that slices through its verses and choruses ("nostalgia burns/ nostalgia hurts/ nostalgia flirts/ nostalgia fucks us up"). Following on from this is the similarly nasty, straight ahead pounding of the title track, which eventually culminates in a slow, but equally hard-hitting end, with singer Noam, still roaring, proclaiming "brothers, sisters, reap what you sow/ God is dead, we're alone/ the city's howl never felt so loud, but we're never, quite, mute." Onward this continues through the album- instrumental breaks, the occasional almost metallic solo, the urgency of "Cancer", the hugeness of "Uncommon Ground", the spidery guitar line of closer "Asleep". You can pick out reference points, certainly, but there's a refreshing mix of hardcore eclecticism and, as said above, coherency; it's never scatter-brained.

The lyrics tend to talk about freedom (be it intellectual, or animal) versus the tedium and disaffection of modern life. Noam sounds like a man on the edge, desperate, but desperate to convey something, running toward, not away. Also notable is the way the lyrics reference other works, be it other bands, or literature (the album is named after Ginsberg's poem), but transform rather than just copy lines. You can see some of that in the lyrics from the title track above, but also in "I Wake to See the World Go Wild" â "the premise never changed, we're just a minor threat/ still free to a certain degree?/ you can thank the dogs for that". They go about it in a rather different way to Sublime, it must be said.

Overall, a powerful, heavy, brilliant album. The band nearly dissolved before making it. Here's hoping they do more in the future.

Weatherbox: Flies In All Directions

EdTang and The Chops: Self Titled