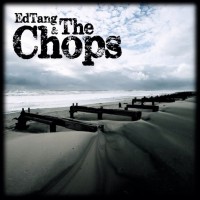 Rough, down to earth and authentic. EdTang and The Chops perform some of the finest Americana Folk their hometown of Asbury Park, New Jersey has ever seen. Hailing from a town where Bruce Springsteen wet his feet and a state that considers the square dance their state dance, this is a bold statement. With their upcoming self titled EP, EdTang proudly proves that he and his friends, do in-fact, have chops and no shortage of them. Clocking in at just under 20 minutes, this effort is five songs full of upbeat Folk musings styled in American grit and perseverance.

The opening track "When Death Should Find Us," speaks volumes to the rest of the album. An upbeat folk punk tune about the joyous acceptance of death and the resulting pleasure that a care free life brings. "But thats alright if I should die tonight, let me die tonight," a chorus that boldly connects each melancholy verse as described by gruff voiced EdTang himself. Instrumental breaks include; crunchy guitar solos backed by a solid wall of acoustic guitars, splashing drum hits and even an extended chorus. Similar comparisons can be made to Chuck Ragan, Frank Turner or even the boss himself, both vocally and musically. Simple guitar chords strummed in the traditional round about patterns of Folk and Americana are laid beneath gruff yet melodic vocal melodies, lamenting of wants and life's twists and turns.

"Brother in The Way Back" is a heart warming tune that will tug at the soul of anyone with a male sibling. Wether this tribute to brotherhood is dedicated to the loss of Tang's brother or simply a lack of communication is not known, never the less its a simple tune that speaks of family, friendship and strength. The runt of the litter is the Jimmy Buffet, margaritaville splashed tune "A Lapsed Catholic." Too many shakers, organs and smooth riffs fill this song to make it fulfilling. The dad rock riffs during the chorus backed by "Woah Woah Woah" doesn't help its case. The final song is a cover of the folk classic "Leaving Liverpool." A sea shanty about the journey from Liverpool to California. A song that dates back to the mid 1880's, made popular by The Dubliners, among others, and finally resurrected by EdTang and The Chops.

The result of a strong American backbone, folk roots and a New Jersey upbringing, EdTang and The Chops bring no disappointment to this time tested genre. Up there with his contemporaries, including locals The Gaslight Anthem, EdTang indefinitely has more to say than can be contained in a simple five songs.

This Routine is Hell: Howl

La Sera: Hour of the Dawn