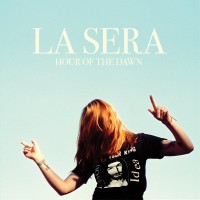 La Sera's third album, Hour of the Dawn is clearly a tactical strike. As strong as the first two albums were, in many ways, they still bore the manacles that brought frontwoman Katy Goodman notice in the first place. Ever since the first Vivian Girls single, the terms "girl group" and "lo-fi" have been shackled around Goodman's recordings. Most of the time, those terms were complimentary, but a prison is still a prison if it's built with good intention. Throughout Hour of the Dawn Goodman cuts those braces away, not through deliberate reaction, but by simply doing new things, and every so often, slipping in experimental pieces.

Opener "Losing to the Dark" features Goodman in a new persona. Many earlier Goodman recordings featured her as sort of a longing or wounded figure. Here, she snaps out at an ex-boyfriend, "How about you have another drink/so you can pass out in the backseat of my car!" Where she used to lament, she's finally striking back. There's more Penelope Houston here than Ronnie Spector.

A good deal of the more aggressive take comes from guitarist Todd Wisenbaker. He's been spotted in Slayer gear and it shows. That's not to say that the album is a thrash fest, but Wisenbaker isn't afraid to blast out shredding solos, and even more deftly, he's able to work them perfectly into place around Goodman's work. The result is an album that alternates between focusing on the contrast between Goodman's gossamer voice and Wisenbaker's buzzing guitar, and one that locks the forces together in a thick, classic FM radio rhythm.

Wisenbaker does add a welcome harder edge to Goodman's music, but all in all, it's Goodman's show. She's trying out new voices and it works. Goodman has a fundamentally sweet voice which is one of La Sera's main appeals- which is still in use on "Summer of Love," the closest song to "old" La Sera. But, on "Running Wild," she adopts a louder, broader, more confident tone, which gives the tune a certain authority. Goodman is the type of gal that knows what she wants to do, figures out how to do it, and does it. "Fall in Place" has echoes of the Cure and other members of the 80's alt-Brit scene- Goodman has a tone, but she's not telling you how to feel with the lyrics, she's just letting you feel it.

Likewise, "Fall in Place" is one of the areas where La Sera's new daring cuts through and the album achieves sublimity. After the soaring chorus, the song drops into a haunting, almost gothic web with voices buried far behind the music, whispering and calling out, obscured by the front-stacked instrumentations. The second La Sera album, Sees the Light featured 10 tracks saluting classic pop structure. Hour of the Dawn has those moments, but it becomes even more exciting when strangeness creeps up between those classic moments. Call it personal bias, but "Kiss this Town Away," one the album's darkest tunes, features Goodman dropping into a low, dread-inducing voice that ever-so-slightly resembles Nick Blinko of Rudimentary Peni's gravelly, doom-incarnate voice. This holds particularly true when she dirges the wonderfully death-rockish "Climb the stairwell/watch night fall/see the window/let it all fall down." Comparisons to Siouxsie Sioux wouldn't be misplaced either.

There are parts of older La Sera and even Vivian Girls here, but for the most part, it's been updated or replaced with either straight-up rock and roll, or colder, nearly goth material. Before Hour of the Dawn, it seemed as though La Sera was backed into a corner, forced on one-side by the band's influences and on the other's by fans expectations. This album isn't a middle finger to either of those drives, but it is a skillful, daring, side-step into a new plane that leaves the band with far more aspects to explore than when they started.

EdTang and The Chops: Self Titled