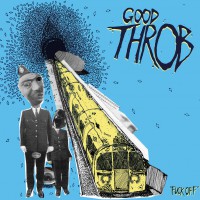 When I first heard the Sex Pistols I was blown away, such was the fury that was delivered especially when compared to most, if not all, of the music I was hearing on the radio at the time. A few years later it was Crass that had a huge impact on me, as their output seemed even more intense and in the UK it was a rallying call for the disaffected youth under the abhorrent leadership of Maggie Thatcher. We all know that over the years, punk lost its shock value and that in many ways it's been watered down somewhat, notwithstanding the large number of bands that are actually protesting and making a racket. So, when a group comes along that immediately brings to mind that sense of danger that I remember from my mid-teens I'm more than ready to get enthused and agitated. That group is from London (UK) and is called Good Throb.

Naming your debut album Fuck Off is another sure-fire way of getting people to notice you and in doing so it's better for the band if they can actually back up that chutzpah with something that kicks ass. Good Throb does that without any problem at all. Mixing the bile of Crass, with some Gang of Four post-punk and a huge dose of Cockney Rejects bravado for good measure, Good Throb don't do things by halves and are obviously a group of severely pissed off individuals determined to make themselves heard above the noise of the London streets on which they walk.

There is something danceable about a number of tracks on Fuck Off and the bass does a grand job of pumping all of the tracks along, but for me it's the searing, angular guitar work that adds the edge to this record. With KY Ellie offering some of the most caustically soaked vocals I've heard in a while and coming across a lot like Steve Ignorant in her delivery, this record is one with a significant abrasive quality. However, it actually is quite a comfortable listen, or at least it is to me although despite that there is more than a handful of songs that have an acerbic thrust which sends tingles up and down my spine: "No Taste" really does bark and bite in a way that is impossible to turn your back on. Likewise, "Dog Food Dick" is drenched with bile and anger, containing enough energy to power a small city if harnessed correctly.

Good Throb is already gaining a lot of favourable press for the no-nonsense approach the band takes and it's all extremely accurate and deserved. I find it interesting when considering Good Throb compared to the likes of Perfect Pussy, a band that has also garnered a tidal wave of positive press but one which I find lacking in any real sense of deep-rooted passion. Good Throb pulls no punches, they're the real deal.

La Sera: Hour of the Dawn