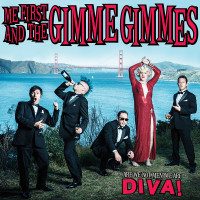 Hi. If you've joined me here, most likely you're still down with the shtick that is Me First and the Gimme Gimmes. Personally, I'm still game. I love being able to sing along with an album immediately and I still love that classic Fat Wreck sound, having grown up on a steady diet of Lagwagon, NOFX and No Use for a Name. I love the title too, and it's funny timing since we just posted our Two Gregs One Podcast episode that featured a classic review of the Devo album its title is a play on. Listen to that episode here, dinguses.

Now, I can't sing along to every word immediately like on Have a Ball or Blow in the Wind. But even on Gimmes albums like Love Their Country where I only knew a couple tunes going in, they all still became sing-alongs. They were like Gimmes-penned fun punk jams, and then when I hear the original in the supermarket I exclaim, "This isn't how this song goes!" The only release of theirs I never connected with was the Sing in Japanese EP, since, well, I can't sing in Japanese without a pronunciation guide.

There are immediate standouts, but as always with the Gimmes, the standouts can vary from listener to listener depending on which originals they connect with the most. My sister wore out her Paula Abdul cassettes, so "Straight Up" was an instant favorite for me. Fat Mike's buzzy bassline and the lead guitar that follows has got to be a classic punk reference, but I can't seem to put my finger on it. Help me out, commenters. Cher's "Believe" is hilariously awesome because they take Spike Slawson's voice and run it through more and more effects like auto-tune and massive delay, a pretty faithful cover vocally and appropriate as the song was one of the first massive hits to use and abuse auto-tune for musical impact. "Karma Chameleon" is an amazing if unexpected addition (Boy George being the only male diva here), and their cover rules, complete with the Buzzcocks' "Everybody's Happy Nowadays" guitar line creeping up in the intro and throughout.

On the Titanic theme "My Heart Will Go On" by Celine Dion, they avoid their standard double-time and take it in an Irish jig direction with booming percussion and claps, acoustic guitar and accordion. It works great and breaks up the track list with something different. Madonna's "Crazy For You" never goes Fat Wreck either with ukulele, cabasa and subtle bass guitar the whole way, featuring awesomely cheesy sax solos. There are a couple breaks in the song where you think they'll bust into their signature double-time skate punk, but then it's back to the uke. They're just fucking with us.

As much as I'm loving this album so far, there there were some odd choices made. They've already released "I Will Always Love You," (penned by Dolly Parton) on the Dolly square 7-inch but it's also included here, sneaking it in as the Whitney Houston more diva-ish version when it's actually the same recording. "Speechless," a Lady Gaga tune, is honestly a cool piano ballad originally, I discovered in preparation for this review. They start it off with a great homage to the Dead Boys' "Sonic Reducer" (even jamming it into the bridge of the song under the Gaga vocal line as well), but it seems like they should have gone with a bigger Gaga hit like "Paparazzi," "Poker Face" or "Born this Way," so someone who has not bothered to keep up with the fashion-challenged pop star would still recognize the song. Missed opportunities: Katy Perry, Rihanna, Beyonce and Taylor Swift. Would love to hear a Gimmes version of "Single Ladies" or "I Kissed a Girl." Also, I wouldn't consider Karen Carpenter a diva (a diva's gotta be flashy!), but "Top of the World" has a catchy hook so who cares. I do like that they give some of the original old-school divas their due with Donna Summer's "On the Radio" and Gloria Gaynor's "I Will Survive." Really nice time span covered here.

We Are Diva! is already becoming my summer soundtrack and my teaching year hasn't even ended yet. This is windows down cruisin' shout-along fun, and I'm destined to embarrass myself by singing Cher with such enthusiasm at a stoplight. The album finds the punk all-star veterans breaking some of their original rules to mix it up nicely. It's yet another solid set from the Gimmes.