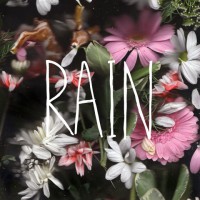 Goodtime Boys have always been one of the underdogs at Bridge 9 in my opinion, which doesn't take away from the music they made. They were always decent but were missing something; something to just turn things up a notch. This record is just that. Rain finds what they were looking for –– enhanced aggression and a post–hardcore fine–tune that's ready to roll with the best of the current crop. if they keep this up, they definitely can morph into a band that doesn't have to trade on its label's name. Because with an album like this, it'll be the other way around. It packs serious punch.

Vocalist Alex Pennie has a gruff, half–throaty style that to me is what a hybrid of Jeremy Bolm and Kyle Durfey would sound like. It's ironic because so much of their music sounds like Durfey's Pianos Become The Teeth while still maintaining a lot of hardcore influences, patterned to Touche Amore no doubt. Several comparisons can be found at different points on the album –– Defeater (unsurprisingly due to past affiliations on older records), Balance and Composure and fellow UK band Departures. There's a lot of angst in Pennie's delivery which mixes well with the band's dissonance, screamo and overall flexible sound. Everything comes in small amounts to keep the post–hardcore recipe flowing. "Wallflower" is a stark example of this –– melodic, powerful, angry but cohesive. That's the key to the record –– they find ways of engaging and connecting due to balancing tonal shifts. Sometimes, relaxed and chill but at other times, hard–hitting.

Lewis Johns (guitar) and Casey McHale (drums) build the momentum of the album so well. Lots of passion to the spine and they never let up. That's expected. Goodtime Boys are made for this relentless vibe. They've grown technically too by allowing the instruments to take center stage a bit more with Pennie supplementing in the back –– something again which PBTT do so well. This album feels like a sibling to 2011's The Lack Long After. Pennie's accent is diminished but still flows well. "Dandelion" highlights this as it rolls into the calm breather of "Daydreamer" –– a haunting little jab at a ballad before "Newspaper Sky" takes its turn at a Title Fight–esque spin.

Rain is a brilliant step up for a band that needed it to show just how much they have to offer. There's a lot of anguish here but all in all, it's a graceful record, rife with passion and emotion. Recommended.

Ducking Punches: Dance Before You Sleep