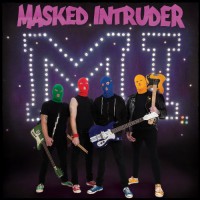 Unlike the vast majority of the Punknews community, this writer wasn't immediately smitten with Masked Intruder's self–titled 2012 debut full–length. It had its moments ("Stick 'Em Up" remains a house party staple to this day) but by and large I felt the songs weren't strong enough to make the gimmick completely work, and found myself reaching for The Ergs!, Teenage Bottlerocket and Off With Their Heads when I needed a modern pop–punk fix. Still, their debut showed a lot of promise and I went into their followup, M.I. with a healthy sense of optimism and a willingness to be pleasantly surprised. Did they deliver– Eh...

Stealing is obviously a big part of the group's shtick, so it shouldn't come as a huge surprise that the group have stolen from themselves quite a bit on M.I. There are not one, not two, but THREE songs that sound more than a little bit like "Stick 'Em Up." "When I Get Out," "Hey Girl" and "Don't Run Away" all recall that previous album highlight in one way or another, be it a riff, a drum beat, a vocal melody or the stop start rhythm that made that song so irresistible. Sadly, none of these new offerings have that same spunk or energy. "Almost Like We're Already In Love" stands out by virtue of just being different from the rest of the album, putting off an almost Bedouin Soundclash vibe (seriously) but even that manages to feel like they just stretched out the intro from "Wish You Were Mine" into a whole song. Opener "I Fought the Law" (not a cover) opens with the same siren soundbite that led into "25 To Life," but this might just be a new Masked Intruder tradition.

Not to say there aren't enjoyable moments on M.I., as there are plenty. The opening lick to "You're the One to Blame" is an absolute earworm, and the song itself recalls early Weezer at their finest, as does "Weirdo." Both of these tracks will make great summer jams, and deserve to be much closer to the front of the album. Closer "Locked Up and Lonely" is a delightful little pop–punk gem and a fine way to close the proceedings. "Crime Spree" is one of the most immediately catchy tracks and therefore one of the best. Masked Intruder have a great ear for pop hooks.

There are no surprises to be found on M.I., and for a big portion of the group's fanbase, this will be a good thing. M.I. is every bit as strong of a record as their debut, so it's hard to imagine anyone's opinion of the group radically changing, although one wonders how long their gimmick will hold up. Some of the songs on M.I, notably "The Most Beautiful Girl" are just straightforward love songs, with no mentions of any criminal activity, making it plausible to think that even Masked Intruder themselves are getting sick of it. Intruder Blue still has a great voice, and the group occasionally manages to crank out a great pop song, it's just hard not to wish for more.