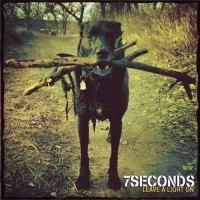 7 Seconds have come out with their sixteenth album called Leave A Light On. It's a really fast and energetic melodic punk album that seems to fit the style they have been playing their entire music career. The guitar parts have complex power chord progressions and very short, Chuck Berry–esque guitar solos. The drums are also very fast, which adds a lot of energy to this album. And the band did a great job getting backing vocals to compliment Kevin Seconds' lead vocals.

Of the 14 songs on Leave A Light On, two really stand out. The first is called "Slogan On A Shirt," which is the band's way of calling out some with what they view as hypocrisy (or even the posers) in the punk scene today: "We gotta spread this shit around/Make it more than just some slogan on a shirtâ¦It's not a new philosophy/Still amazing that you treat people like dirt." The other song that stands out is called "30 Years (And Still Going Wrong)." Think of it as 7 Seconds' version of Rancid's "Last One To Die." It's an autobiographical song dedicated to them being a band for 30 years, which is quite the accomplishment: Thirty years and we're still going wrong/Thirty fucking years we roll along." A really nice touch that the band put on this song in particular is that the notes of the guitar solo follows the "woah's" that the backing vocalists sing.

The fact that 7 Seconds has been together for over 30 years and that Leave A Light On is their sixteenth LP is pretty amazing, but if this album were any longer it would've been kind of repetitive and boring. Really, this album would've have been fine if they left out two or three songs. The tracks all kind of blurred together when listening to this album from beginning to end. They all sound pretty similar to one another. Musically, not a lot stands out. Lyrically though, this is definitely some of their better material.

In School: Praxis of Hate [7-inch]