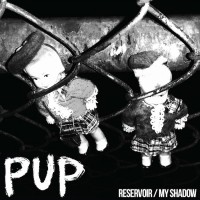 For those of you who have been hearing or reading the hype about PUP and aren't sure about whether they are worth investing your time and money into to them, let me first tell you that they are completely worth it. The really cool aspect about their self–titled full length is that every song is vastly different from the other. For those of you who like the more indie sounding stuff there are songs like "Mabu" and "Lionheart" and for those of you who like the louder and rawer stuff there are songs like "Guilt Trip" and "Back Against the Wall." But the song that will probably draw you in to becoming a fan of PUP regardless of what kind of sound you are more into is the song "Reservoir." This song is literally jaw dropping (that's exactly what happened to me when I first heard it). The main guitar riff is s catchy that it will instantly get stuck in your head. Sonically, this song is a rollercoaster. The verses build up suspense and lead into this massive chorus. Stephan Babcock's lead vocals truly shine on this song. Actually, all of the band members' vocals do. The backing vocals compliment Babcock perfectly. And lead guitarist, Steve Sladkowski plays a wailing guitar solo that is full of bends and it fits just right.

On the B–side of this 7–inch is PUP's cover of "My Shadow" by Jay Reatard. PUP really made this song their own. The guitars or more distorted and defined than the original recording and they tweaked the melody just a little bit. PUP added some backing vocals as well which compliment Babcocks's lead vocals perfectly and they added a few extra guitar fills in the chorus. Could it be that PUP beat Jay Reatard at his own game– It really seems like it.

Granted, it's very early for "end of the year" lists, but PUP is most likely the best new punk band of the year in my opinion.

Note to my fellow vinyl nerds:
500 copies of this 7–inch were pressed in black vinyl.

Frantix: My Dad's a Fuckin' Alcoholic