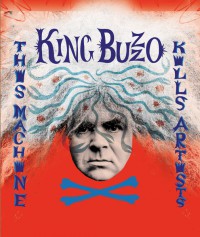 Buzz Osborne's first solo album is clearly an effort to avoid the shackles of the modern singer–songwriter–goes–acoustic clichÃ©. Usually when an established performer releases an acoustic album, he does it to provide some sort of insight into himself. Our generic singer–songwriter sings in a gentler voice to conjure up some manufactured texture of sentiment. That figure usually plays softer than usual on his guitar to allow the listener to "appreciate" the colors of the melody. Sometimes, this character even just re–records already existing material to "put a new spin" on the composition.

Osborne does none of these things on This Machine Kills Artists. He strikes down on his guitar with such violence that the strings ring out a thick tension, making them sound almost electric. "The Vulgar Joke" has an off kilter clang its strings that make it sound like the part of a horror movie soundtrack right when the protagonist learns his daughter is possessed by Satan.

When Osborne sings, he doesn't do that thing where he sings from the back of his throat with sawdust in his voice. Instead, he wails like the early metal heroes, at times approaching a goth intonation, and casts haunting vocals on top of his clacking instrument. The music might be slightly quieter simply because it isn't amplified, but it's not any gentler than his usual stuff. By contrast, Osborne seems to be going out of his way to make these recordings as combustible as possible.

Though, there are parts where Osborne studies the fundamental concept of melody. He never does that James Taylor thing where one just randomly strums out soothing chords to hear how they react to each other– most the songs here seem to be played with one string and a thumb. But, "Everything's easy for you" does allow the notes to drift away for the purpose of really savoring their sound, sort of how mid–period Zeppelin would just let notes hang in the air for eternity. "Drunken Baby" finds Osborne on the low side of his guitar, opting for a sparse, acoustic drudge, which provides dressing for the desperation in his voice.

But, just because the aesthetics here are new for Osborne doesn't mean that he radically changes his subject matter. These lyrics could easily be slipped into any Melvins records. With lyrical elements of Dead Kennedys, Captain Beefheart, and the Fugs, Osborne likes to let (sometimes snarky and sometimes mean) cutting admonitions drip from his mouth. Just look at the titles– "The Spoiled Brat," "How I Became Offensive," "The Blithering Idiot."

At any rate, unlike the usual singer–songwriter–acoustic–album, we know less about Osborne from this record than when he's backed by a thundering bassist, two crushing drummers, and 2,000 watts. Though to be fair, a solo, acoustic album that clouds the performer does say something about him that we didn't know before.