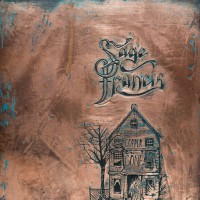 Sage Francis has returned with his first album since Li(f)e and it finds him stepping back into a more traditional hip–hop sound after spending his last album working with some of indie rock's household names such as Chris Walla from Death Cab For Cutie and the late Mark Linkous of the band Sparklehorse. This time though, Sage is back working with a who's who of underground hip–hop talents such as Reanimator, Alias, Buck 65, and Cecil Otter of the Minneapolis hip–hop collective Doomtree. While some people who prefer the more melodic instrumentation of Li(f)e may disagree, Copper Gone benefits greatly from a return to normality â¦ or at least as close as one can get when dealing with Sage.

The album opens with the song "Pressure Cooker", where Sage documents where he's been what he's been doing in the four years he's been off. Based on this you get the feeling he's been dealing with a lot of the issues any of his listeners since Personal Journals are more than familiar with. And while his return to recording and touring may indicate to some that he's worked through these issues, one listen through the rest of this album will show you that he's still got a long way to go before he becomes the person he wants to be outside of this art.

The next track "Grace" finds Sage working his way through the tail end of a relationship. It's on songs like this, that you're reminded Sage got his start as a slam poet when he spits these lines, "You should drown me in your womanhood or teach me how to swim. Beat me with my own hands or tie down my limbs. Suffer for my sins or let me suffer from within. But, in the end this is not a love ballad." With that, Sage proves that nobody in hip–hop can hold a candle to him when it comes to putting together a lyric about love lost, and the majority of the people making what passes for emo these days are playing catch up as well.

On "ID Thieves" we find Sage taking on a scene of rappers who are claiming underground status despite a fairly above ground appeal that have been making waves on the hip hop charts of late. And while Sage has certainly made his mark on the mainstream, Li(f)e charted at number twenty–eight on Billboard's album charts, he has done it all while sticking fairly true to the underground music scene. In much the same way artists such as Ani DiFranco and Fugazi found their fair share of success on the Billboard charts while sticking true to their ethics.

Some of the best lines on the album come on the track "Cheat Codes" where Sage shows that despite his ability to be serious though out his career he still has the ability to write a great punch line with the lyrics, "I'm hopping freight trains with nothing but a bindle (no hobo). Little homie says YOLO – no props. I photobomb your photo ops busting out the robocops" and "Don't expect revolution from the music that is solely created for booty clappin'". And if there was any doubt that Sage is one of the best in the underground hip hop game, with the possible exception of Slug and Aesop Rock they are put to rest in the second verse when he says, "You've been padding your resume, while I've been rhyming about life like I'm rapping my death away."

After a few tracks that aren't throwaways, but by no means standouts, we come to the song "Make âEm Purr" and it's lyrical content ranks right up there with "Black Out on White Night" from Human the Death Dance as one of his songs where he puts a few lines together that are almost too relatable to anyone who's been in the situation he's describing. For anyone who follows Sage on Facebook or other social media, you know the man is a cat owner. And while his feline friends aren't the only topic he touches on during this track, when he says "Spent more cash on my cat than I did myself, when I stopped eating I took him to the vet so they could check his health. They put a feeding tube in his neck, I said âPlease let this work, because if it doesn't I've got nothing left.'" With that line, Sage has touched on something that anyone with a pet who has been sick or they've lost can relate to. And he does it without wrapping it up in an over the top metaphor.

The entire track "Vonnegut Busy" finds Sage combining the political with the personal and combing the two to make for one of the stronger tracks on the album. While Sage has always been able to write about personal issues, his debut proper was called Personal Journals after all, and the political as seen on A Healthy Distrust he's never combined them so seamlessly as he does on this track. While this album is filled with standout cuts, this is a track that shows him moving a bit further as an artist as he puts himself and the world around him on trial all at once in the same song. Which anyone familiar with the literary works of Kurt Vonnegut knows makes this an aptly titled song as well.

This album is a welcome return to form for Sage after four years away in an attempt to work out some of his domestic issues. As stated before, it doesn't seem that he did after listening to this album and if finds him picking at the holes in his life like he hasn't in years. The ferocity, which diminished slightly on Li(f)e is back in full force on this album. While it is as ground breaking as Personal Journals and doesn't top his crowning achievement, Human the Death Dance, it's good to see that Sage is back making records. Hip hop is better off with him here, even if he'll never get the credit he deserves from the people at the top of the industry. And perhaps it's better that way, because music like this only comes from people who are still hungry for more.

Black Cat Attack: Bright Side of the Moon