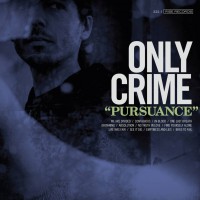 I don't like the term "supergroup." Just because a group of individuals from often well–known bands get together and form another band, there is no automatic right to call it a supergroup, although I do understand where the use of the term is coming from albeit somewhat lazily applied. However, I got quite excited back in 2004 when I heard of Only Crime especially as the original line–up included members of Descendents/All, Good Riddance and the cruelly underrated Hagfish. Unfortunately the debut album To The Nines was a bit flat and certainly didn't stand up as a fitting output considering the personnel in the band. As such I totally ignored the band's second album Virulence which featured an amended line–up but peer pressure has resulted in me getting hold of Pursuance to see how the passing of time might have affected Only Crime.

The current line–up consists of Bill Stevenson (too many bands to mention) and Russ Rankin (Good Riddance) along with Aaron Dalbec (Bane), Dan Kelly (The Frisk) and Matt Hoffman (Modern Life Is War) and finally it seems as if everything has come together in the right way to allow Only Crime to deliver an album that has the vitality and quality that one would hope to have from a bunch of musicians with a considerable amount of experience under their belts.

Musically there is a thunderous quality to the rhythm section and that's really no surprise especially when you've got Stevenson pummelling hell out of his drum kit. Here's a man who has been round the block numerous times and is probably now regarded as the block itself. I love listening to his work and it's evident that across Pursuance it makes an important contribution in conjunction with Kelly's bass tying everything down together tightly. This allows both Dalbec and Hoffman to add the dynamic thrust and occasional discordant element (quite Stephen Egerton like at times) via their guitars lifting the songs onto a high level that forms the perfect background for Rankin to add his vocals to. Rankin's voice is in excellent form here and there is no doubt that when on this form he is one of the better vocalists around. With all elements coming together so well I start to hope that Only Crime becomes more than just an occasional band and fortunately I'll be getting the chance to see them here in the UK this summer.

The songs all manage to make their mark, none more so than "In Blood", a track that is fitting for the favoured third spot in the sequencing i.e. the track usually identified as the strongest on a record, or it was thought to be so a couple of decades ago. It is however, backed up by a plethora of really good songs, and it's done within a format that isn't rigid or stuck to guidelines – there are enough moments of variety across the record to help keep it sounding fresh on each listen.

Where To The Nines failed to ignite my passion, Pursuance is full of fire and brimstone, bringing to the fore the qualities that you would expect from the five members of the band. I still don't like the term âsupergroup' but Only Crime have shown that the bringing together of a variety of people, skilled at their chosen field, can bear fruit. Pursuance is an album lacking filler and sets a high standard for melodic hardcore with its invigorating suite of songs.

Note: I've now listened to Virulence and it's not bad, definitely a move on up from To The Nines but with Persuance I feel Only Crime have come of age as a group.