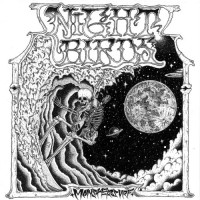 Over the last few years Night Birds have established themselves as one of the finest punk bands on the planet. I'm not employing hyperbole here, this is a fact whether you agree or not. The ability of the band to crank out catchy punk rock, laced with surf guitar has caught the imagination of many and comparisons to great bands of the 1980s like the Dead Kennedy's and Adolescents have highlighted how good Night Birds actually are.

The band has displayed a propensity for including instrumentals on their previous releases and this time out all four tracks on this EP are of that ilk. It might seem an odd move by some but it really does make sense for Monster Surf to come into being, especially as it's something Night Birds have a distinct knack for and it's not something new to the band. Ok, so it does mean that this is the Night Birds sans the snotty vocal input of Brian Gorsenger and he normally adds some bite to songs but this isn't like a band taking a big risk on a release: the Night Birds know what they're doing.

All four tracks rip as one would expect, with P.J. Russo making mighty fine use of the six strings at his disposal both in laying down some killer riffs but also by backing them up with some striking chords when the opportunity arises. However, the instrumentals wouldn't work without the rhythm section of Joe Keller (Bass) and Ryan McHale (drums) – these guys really do a grand job in making sure there is a groove for Russo to work both within and around.

Each side features one slightly shorter track and one which is a bit longer. The shorter tracks "Unavoidable Filth" and "Pyongyang Bound," work just like a short story does – you're in and you're out, without there being much overdoing of the tale but nevertheless, satisfaction is the result and the former includes some crazy horns too as it comes to a close! The longer tracks, "Agent Zero" and "Hope For The Best (Expect The Worst)" (a homage to Mel Brooks), work more like a full on novel, allowing Night Birds to build up into something a bit more comprehensive, creating a story using character background and more in–depth narrative – I find myself creating visuals in my mind of situations and occurrences to accompany the tracks, giving my mind free reign to flesh out a story that fits in with the musical background. Out of all four tracks it's "Agent Zero" that provides me the greatest sense of there being a soundtrack to a movie of my own writing, with a deliberate and intense opening tempo which gives Russo the room to weave his magic before a slightly tumultuous ending. The track also features the occasional sci–fi–like synthesizer sounds too – these really add to the greatness of the song.

The thing is, now Night Birds have taken the step to release an EP of instrumentals, will they stop at that– Surely there would be an audience for a whole long player of tracks like this– Well, there's an audience of one here, ready and waiting!

Against Me!: Unconditional Love [7-inch]