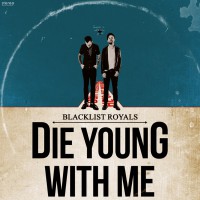 Blacklist Royals have gotten a bad tag in the past. Boring and bland were thrown around but honestly, those bullets felt like an extension of the inevitable comparison to The Gaslight Anthem. In large, I've always found the latter to be pretty average so Blacklist Royals never really rocked my radar. However, Die Young With Me feels more progressive, developed and contemporary. Sure, it's still varnished with their regular characteristics and old musical attributes but this album has a welcomed trait to it â€“â€“ they explore their sound much more than records past and expound their rhythm to match a fully grown lyrical canvas. In short, it's mature and very telling.

Organs and pianos do distinguish themselves heavily on Die Young With Me but not in an overdone fashion, thankfully. They maintain their Nashville roots but it's more subtle, while nodding to bands like Restorations and especially Nightmares For A Week. The nice, southern rockâ€“nâ€“roll charm is smartly done as seen on "Missing Something" and the countryâ€“tinged tracks like "Skeleton Crew" and "Take It: Leave It." These compositions add great value by brushing up on a past flaw in their lyrical style. Blacklist Royals address this by employing a lyrically vast tone and upping their range to a faster, midâ€“tempo beat. This is glaringly obvious thanks to the highly polished production which really wants to silence doubters with a focus on its synthâ€“heavy drive â€“â€“ bringing forth sweet melodies throughout.

Some tracks do feel the same as allâ€“tooâ€“familiar melodies seem to pop up at one too many intervals but as with any album, there are flaws and you'd expect room for improvement. That aside, the sentiment and warmth, a la the ballad "Twenty Six and Gone," shows how much they wanted to incorporate their old folky style while still charting a course forward. These influences are less pronounced but still felt when need be, further strengthening how well they've evolved over the years. The band does a remarkable job in harnessing various genres in a relaxed, nonâ€“complex tone. This makes for a simple yet solid listen.

Die Young With Me feels like a crossâ€“country album. One for road trips as you discuss things like life, love, religion and so on. It's got the inspirational and nostalgic musical themes to it from the '60s right up to the '90s and they balance out neatly. Everything's infused brilliantly and given their past trials and personal tribulations, it's a great sign to see this record pan out so smoothly. Solid musicianship and a wider lyrical dimension â€“â€“ can't ask for much more. It boasts catchy choruses, singalong verses and nifty hooks at all angles so with that said, Blacklist Royals have finally found their musical blueprint here. It's a definitive sound that's ready to blossom and they'll surely have their critics pondering their next move. They really did sing about the impermanence of life, and it's never sounded as good.