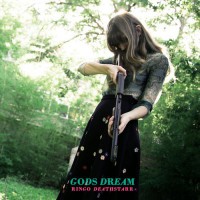 Shoegaze is a style of music that was created in the 90's and some would even venture to say was perfected shortly after it began by bands such as My Bloody Valentine and Slowdive. These bands invented the walls of reverberated guitar distortion, black leather jackets and soft lyrics we associate with the genre. In my opinion, 1991's Loveless by My Bloody Valentine is the best shoegazer album ever written. Some might say this makes me seem like an old cranky bastard who complains "they don't make music like this anymore." Sure 9 out of 10 times what you encounter will be total shit, but there is always a little voice in your head looking for the 1 out of 10 new things that impresses the hell out of you. For me, that 1/10 is Austin, TX based Ringo Deathstarr.

The album starts out with "Bong Load" which does not seem like much of a departure from their previous creations. (I mean this in the best way possible.) I enjoyed hearing the MBV influence without feeling that they were ripping off their style. The droning and dueling vocals combined with buzzing guitars leave you in a good place to continue listening to the album. The one part of this song I found interesting was the use of a guitar solo, which I have not heard too much of in previous tracks.

"Flower Power" almost channels Belinda Butchers. The track is not a huge departure from previous wrk until the piano solo and thrashy ending. Although this was a huge departure from how the track began it strangely works. If "Flower Power" is a minor departure from Ringo Deathstarr's signature sound, "Shut Your Eyes" is a HUGE departure from anything they have recorded. This almost starts the beginning of a new direction for the band. "Shut Your Eyes" has a synth backing track and rhythmic vocals sound which is almost 90's popish. I must admit this is my least favorite track on the album but I have the feeling it will either grow on me or I will have to get really fucked up to enjoy it.

Later on in God's Dream, Jeff Schroeder of The Smashing Pumpkins joins in on the fun for "Chainsaw Morning," which brings a harder edge to Ringo Deathstarr's dreamy post–hardcore sound. The track is a fun synth influenced song with a catchy chorus and soft vocals and driving guitar riffs. I think that "Bong Load" and "Chainsaw Morning" and "Flower Power" are the best tracks on the album and worthy of many repeats on you iPod.

"See You" and "Nowhere" continue to bring the harder edge to this album with the use of more distortion rather than fuzz. I do not think that these tracks were the strongest way to end this album, but they did give me something to think about after the album was over.

By the time this album ended, I was left with some really mixed thoughts. I loved the way the album started out, but was not so sure about the way it ended. I guess this brings me back to the questions I asked at the beginning of this review. Am I just too set in my ways– Have I become to accustomed to Ringo Deathstarr because they sound like My Bloody Valentine– Do they still make music like they to– Am I holding this record to a standard I know it could never meet– God's Dream does not give me those answers just yet and I don't know if it will. God's Dream is not an album that will not suck you in right away like the band's earlier work.