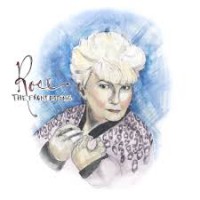 After the success of their last album, 2013's Talon of the Hawk, The Front Bottoms are back with a new EP titled Rose. Prior to the hype received since signing to Bar/None Records, they independently crafted two full–lengths and a few EPs that were never widely circulated. Rose is a six–song EP that revives some of these old fan favorites which newer fans might have never known about.

"Flying Model Rockets" starts off the EP subtly with a drum beat consisting of hi–hats and rim clicks before building into a steady dance–rock groove. Unlike the previous version from 2009's My Grandmother vs. Pneumonia, the synth–pop element has vanished and the BPMs are turned up a smidge. As you'll notice throughout this record each tracks BPMs are increased slightly, but never enough to where it's unrecognizable. Next up, "Lipstick Covered Magnets" starts with gang vocals which roll into staccato acoustic guitar strums with a backing 4/4 kick. Despite a couple of nuances, all the songs on Rose are structurally laid out the same. Another difference between the new recordings and the older versions can be heard in how they've arranged the instruments. For instance on the track "Jim Bogart" the implementation of female response vocals and trumpets is a nice touch and indicates more so where they're at now as a band. "Be Nice To Me" takes on a new energy with guitar leads replacing single note piano lines. The musical maturity on Rose reflects similar confidence as seen in Talon of the Hawk. Fan favorite "12 Feet Deep" starts acoustically, but unlike 2008's I Hate My Friends version, drums and a prominent bass line arrive quicker in the song instead of towards the end. New life seen in these songs could also be due to The Front Bottoms line up that now runs as a four piece as compared to the three that toured for years. The only song I didn't recognize from a prior release is "Awkward Conversations." It completes the release though as a sturdy acoustic way to end.

According to The Front Bottoms website, Rose, which is named after drummer Mat Uychich's grandmother, is the first release in a series of EPs that will be titled after their grandmothers. It makes me wonder if the series will all be updated versions of older songs or if we'll see some new material in there. Regardless, I feel that this is a release all fans can appreciate.