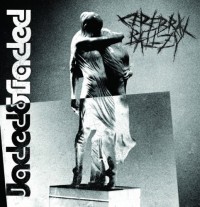 Cerebral Ballzy has come out with their sophomore album called Jaded & Faded. The album is filled to the brim with a distorted–fuzz sound and it's kind of a throwback to early '80s hardcore mixed with a little bit of psychedelic rock in it. The majority of this album has a lot of "stop and go," in that in just one song like "Another Day" for example, the song will start out fast and then suddenly slow down significantly. Some bands can do this and get away with it, but in this case Cerebral Ballzy is not able to do it gracefully. Two–thirds of the song is pretty good and then the middle third slows down and comes out of nowhere. A lot of this happens throughout Jaded & Faded in other songs like "Parade of Idiots" where it's like the song's sound and tempo constantly changes to the point where the parts just don't fit together and sound choppy. Another aspect of Jaded & Faded that is distracting is that it seems like lead vocalist Honor Titus puts on a British accent (or some kind of accent) in some of the songs even though the band is from Brooklyn. It's not clear as to why they decided to add that to his vocals.

Of the 13 tracks on Jaded & Faded the song that stands out the most is "Be Your Toy." This song is where Cerebral Ballzy is the most musically daring and willing to explore a slightly different sound than they typically have. "Be Your Toy" is the only song on the album with backing vocals and a main guitar riff that isn't power chords put together. As opposed to some of the other songs on this album, it is also the most musically and rhythmically consistent song on the album.

Jaded & Faded is a solid hardcore album, but its issues are that its not terribly original and it is derivative at times. Most of the songs' sounds are not that easy to differentiate from one another. It seems like they may have overwritten and overthought the songs in the studio. It's also possible that this album is a victim of being overproduced. Regardless, going simpler in this case would have been better.