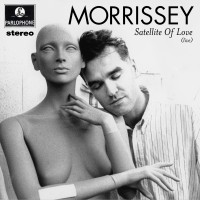 In preparation for Morrissey's 2014 release World Peace Is None of Your Business, three different live EPs have been released (in different formats) under the name Satellite of Love. Like most Moz EPs or anything Moz for that matter, the die–hard fanatics buy them up right away and not only begin their lyrical analysis of the content but their historical analysis of the work hoping to learn just a little bit more about the mystery that is Morrissey.

There are three different formats for Satellite of Love: MP3, 7" picture disc and 12" vinyl. All three of these EPs have the same first and second tracks. The first track is a cover of Lou Reed's "Satellite of Love." To really understand why this live cover is the namesake of this EP, you need to really understand how big of an influence Lou Reed was to Morrissey. In Morrissey's biography he wrote "The daring brilliance of early Lou Reed takes its place with the literary greats, partly because he denied all tradition in his writing and physical presentation. With his Velvet Underground, life itself was the moveable stage; lowbrow, imaginer, maker, self–regarding, susceptible to the will to corrupt." This is a pretty high compliment from Morrissey considering his frequently references to Oscar Wilde and William Shakespeare in his lyrics. I think that this cover is done very well and the live recording sounds about as good as any live recording can be. It was recorded at The Chelsea Ballroom, the Cosmopolitan, Las Vegas on 25th November, 2011. As most fans know, Morrissey is only as good as he wants to be live. I was not at this show but from the likes of this track I can tell he must have been on that night. I have always been a fan of Lou Reed solo stuff so I took to this track right away. I also think that Lou and Moz kind of traveled the same path, they both stand on their own with amazing solo careers, they were both way ahead of their time in forming ground breaking bands. So this cover seems like a fitting tribute to Lou.

Now let's get to the variable tracks. Each EP has 1–2 previously unreleased live tracks. The MP3 version has a live version of "Mama Lay Softly On The Riverbed." I have to admit, I was not the biggest fan of Years of Refusal and "Mama Lay Softly On The Riverbed" was not one of my favorite tracks on the album. So the MP3 version of Satellite of Love's high point is the Lou Reed Cover. Now the 7" is a completely different story, not only does it have an awesome Renaud Monfourny photo of Morrissey of the front, it has a great cover of "You Say You Don't Love Me" by the Buzzcocks. I am always a fan of Morrissey singing punk and I love the Buzzcocks so this was a total win with me. I must have listened to the cover 10 times in a row.

The 180 gram 12" vinyl has two live tracks "All You Need Is Me" from Years of Refusal and "Vicar in a Tutu" from The Queen is Dead/ I love both of these tracks and think that Morrissey sings them well live. Smiths covers usually get the best responses at live shows so I enjoyed hearing " Vicar in a Tutu" because it reminded me of some really fun shows. However, like most Smiths fan I have my favorite songs and wish they were on the EP instead.

Overall, I really like this EP if you are a fan of live Morrissey you will like this EP too. However, Live At Earls Court and Who Put the M in Manchester– DVD showcase Morrissey's talent and live presence a bit better.