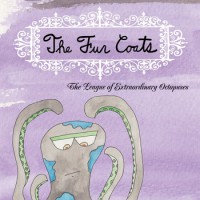 The League of Extraordinary Octopuses (2014)

The Fur Coats are the trio of Marc Ruvolo (No Empathy / Das Kapital and head honcho of Johanns Face Records), Devon Kay (Devon Kay & The Solutions / Direct Hit!) and Davey Houle (Das Kapital). The Fur Coats are a funny band; not funny in a side–splitting way but more of a wry way that raises a grin as one listens to the lyrics. On top of that The Fur Coats provide some of the finest power pop you're likely to hear this, or any other, year.

The band's debut album opens with a raucous fanfare in the form of the title track which contains a slight ska influence created by the use of horns and Kay's expansive bass lines. The lyrics are not much more than the title of the track being sung/shouted a couple of times but this helps the sense of this one song acting as an introduction and setting up everything else that follows.

From there on in, The Fur Coats provide a plethora of power pop permeated songs that have the ability to raise my spirits and put a smile on my face, something that is not always easy if you happen to ask my wife! This is done through the sheer effervescent quality of the tracks which race along at a fair pace, barely allowing me to keep my head, arms and legs still as I easily get caught up in the whirlwind created by the band.

If you've already got the two 7–inch singles that the band have released then you will have almost half of the fourteen songs here and on the first few plays it's obvious that my familiarity with these earlier tracks make them stand out more than anything else on the album. However, there are enough nuggets to be found within the remaining eight tracks to help ensure that The League of Extraordinary Octopuses isn't split into two. For instance, I love the track "Goddamn, I'm A Handsome Man" off the band's 2013 single but I find that "A Thanksgiving Day Murder" is its equal. Likewise with the memorable "Tiny Fists," from the 2011 single "Don't Make Me Beg," a song that puts images of small babies punching away at the world (I'm not sure if that's what it's about or not, but that's the vision imprinted on my mind when I think of the song) which is matched by the awesomeness of new track "Kukla, Fran and Ollie." Basically, for each of the older gems there's one that is ready to stand shoulder to shoulder with it in terms of quality.

The musicianship is top notch across the board, with Ruvolo adding a wonderfully warming guitar sound that provides some great riffs and adds a bit of crunch to proceedings whilst Houle's drumming is far from basic as he adds some terrific beats/percussion to the tracks. For me though, the key musical component is Kay's majestic bass playing which I find myself homing in on each and every time I listen to the The League of Extraordinary Octopuses; he uses the four strings at his disposal to takes the rhythm section all over the place without losing any of the coherence that the songs have and I thoroughly enjoy how I get wrapped up in an instrument that can quite often get overlooked in what it delivers.

This is a band/record not to be overlooked. For the record the album is jointly release by Dirt Cult, Drunken Sailor and Artisitc Integrity whilst the CD is available from Johanns Face.

NOTE: It's great to know that smaller labels like Johanns Face are still going as I remember buying a Sludgeworth LP from them in the early 1990s.

Everybody Row: The Sea Inside [7-inch]