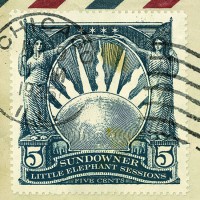 Chris McCaughan is a busy man. Following the release of his third full length for the not–so–solo project Sundowner – last fall's orchestrated, band–oriented effort Neon Fiction – McCaughan began prepping a new record for his other band – the first in eight years – the Lawrence Arms. With the release of Metropole, it looked as if McCaughan was over the solo acoustic act and infatuated with writing and playing songs with more musical girth. Sure, each of Sundowner's first two records enlisted the help of guest musicians, most notably fellow Larry Arm and de facto Sundowner member Neil Hennessy, but both albums were fairly minimalist, deeply indebted to McCaughan's acoustic guitar and substantiated by his vocals. What Fiction and Metropole represented was an austere shift toward full band mode, right– Wrong. In a somewhat subtle surprise, McCaughan took a break in Akron, OH while on a short tour with the Lawrence Arms to record a few tracks for Little Elephant's video series. So impressed with the sound quality, he queued up the guys at Fat Wreck to release the songs as a 7–inch. In a nod to his early recordings, no release – official or otherwise – has provided such raw, unadulterated versions of Sundowner songs since McCaughan's first demos released eponymously in 2006, and even then this record required less work.

Though Sundowner songs often incorporate multiple instruments, the songs are built to exist independently, mostly due to necessity: while Sundowner has played shows with a full band, the vast majority of his sets are solo. So in effect, Little Elephant Sessions is an attempt to capture that unique experience on record. However, something is lost in the process. The issue is not one of familiarity – half the songs featured are pretty lean, even on record, so the further stripping of instrumental beef isn't awkward. But where McCaughan attempts to channel the fervor accomplished through parse, succumbing leads or affectionate double–tracked vocals, he fails to reimagine those qualities in improvisation. There's an obvious vocal strain exhibited at one time or another on each track – no doubt a result of circumstance from touring than honest affinity. Still, it doesn't signify an ambivalent sense of candid provocation, just fatigue. Which probably explains why McCaughan's usually strong mid–range vocals rest on a slightly higher register, sometimes carrying a note too long or missing it all together. His creative license is never abused more than on the three Sundowner originals, where he induces characteristically Lawrence Arms vocal arpeggios to little effect; instead, it comes off as a last ditch effort to haphazardly wrap up the song.

That isn't to summate McCaughan didn't contrive ways to reimagine the songs. "Midsummer Classic" appropriates some of its original sullen earnestness by hopscotching through the first couple verses. Confident with his performance, McCaughan gains momentum in the second half, propelling him to the hopeful lament, "Yeah, it'll take some time, but the dawn will come." And, of course, there's the scathing dual–vocal assault that is the Lawrence Arms' "Great Lakes/Great Escapes", dressed down in a tempered vindication. Incidental – though probably by design – the Sundowner songs on this collection are purposefully slender in their original incarnation, and McCaughan disappointingly elects to follow that standard instead of mixing it up. The result is songs like "In The Flicker" and "Cemetery West" that are fairly identical to their recorded counterparts, down to the run time.

It's decisions like these that foment Little Elephant Sessions' bemusing existence: what's the point– Aside from giving "Great Lakes/Great Escapes" the "100 Resolutions" treatment by transforming vengeful nihilism into epiphanic redemption, McCaughan doesn't do much else. It's not because he can't (there's a rendition of "Mouth Of A Tiger" that is substantially better than the recorded version, save the audio quality), but wont. It ultimately strips the record of any replay value: you may as well just listen to the original. If anything, Little Elephant Sessions begs the question: why doesn't McCaughan just release a record of Lawrence Arms covers– First request: "The Slowest Drink At The Saddest Bar On The Snowiest Day In The Greatest City".

Candy Hearts: All the Ways You Let Me Down