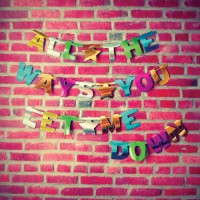 Ok let's be honest for a moment here...everyone enjoys pop punk to some degree. Keep in mind I use the term pop punk loosely. I think there are various degrees of pop punk. Some acts better than others. I tend to enjoy the pogo style pop punk such as The Queers, Screeching Weasel and The Ramones. I will be perfectly honest here though, I do have my own pop punk guilty pleasures...MxPx being one. The point is, we all have a soft spot for a sappy stupid punk song. Shit, Chad Gilbert even managed to front Shia Hulud, play in New Found Glory while producing a Terror album and a This Time Next Year album with a two year period.

Surprisingly, and to add to the place where hardcore and pop punk intersect, the new Candy Hearts album was released via Bridge Nine Records. Yes, the same label that gave me my favorite hardcore album of the year Backtracks's Lost In Life also brought me my favorite pop punk record of the year Candy Heart's All The Ways You Let Me Down. (Also produced by Chad Gilbert)

Let me give you some background here. Candy Hearts is a female fronted punk band from New York. Think of them as Rocking a Horse Winner's Horizon meets Brand New's Your Favorite Weapon. Up until this point their tracks have sounded a bit more alternatives itch a retro grunge feel. The intentions of All The Ways You Let Me Down was to make an awesome pop punk album. I must say, I consider this effort a complete success.

Like most pop punk records, this album talks about relationships. All The Ways You Let Me Down covers the whole spectrum of relationships from single life to break–ups. This theme is perfect for the pop punk album– There are 11 tracks of pop fun goodness. My favorite tracks are "Miss You"and "Brooklyn Bridge" these tracks have super catchy hooks along with upbeat palm mutes and riffs. Although all 11 tracks sound similar, they all remain different enough to make the listening experience an enjoyable one. I also enjoyed the title track "All The Ways You Let Me Down"as it showcases the bands grungier side as well as a perspective into their influences on earlier works. The album ends with a fun track titled "Top of Our Lungs" which can't help but cheer you up.

Overall, I think that All The Ways You Let Me Down is the album that will stand as the staple for Candy Hearts fans.