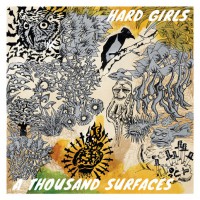 If you've been even slightly cognizant to what's happening in California's punk scene, you should be familiar with Hard Girls. Even if the name doesn't ring any bells, you've probably heard this three–piece before as the group behind Jesse Michaels (Operation Ivy) in the band Classics of Love. Unlike Classics of Love, Hard Girls bring a more post–punk approach that dabbles with elements of indie (mainly seen by the guitar playing) to their songwriting. In a way it emits a modern–day Gainesville vibe from shout–y vocals and the way the instruments are attacked. A Thousand Surfaces is their second full–length and can be a good soundtrack for a night of drunken sing–a–longs with friends.

The first track, "The Quark," opens the record with a lone strumming guitar before being bludgeoned by drums and bass a few seconds in. Very fitting for an opener, it keeps the mid–tempo aggression and gives reason why your ears continue to be glued to the speakers. What's consistent throughout the record is the constant change up of guitar parts in each song. This comes off prominent because there is hardly ever a rhythm track backing. Bold move, but it works. "996 Tears" is a track that will get stuck in your head with the repetition of "I think you won't like it" in the chorus. The raw mid–tempo playing continues till the track "Die Slow," which is the first song to slow down the urgency, but manages to feel in place.

"Plan" definitely stands out on this album as the single. "If I had a plan for making money man/I'd be flying out to see you again" is sung over the bass before a muffed tremolo picked guitar and drums asserts themselves, a true anthem for anyone whose plans get completely f–ed due to financial strain. The whoas in the chorus help the song feel complete and definitely give it a sing–a–long credibility. "Samizdat" contains a ballad vibe in which the song is comprised of two halves. The first half is slow and poignant until going silent before a lone guitar, eventually snowballing into raw aggression. This song adds great musical diversity. To me it feels like two separate songs held together by one idea. It definitely works and gives the track that something extra.

Overall, this album is a very solid release. When the vocals consistently come at you in a manner where the emotion is felt behind each track, a sense of honesty emerges. This release comes off raw, but it's intentional. After all they recorded with producer Jack Shirley who can be credited for working with Joyce Manor. My only qualm is that I feel some of the songs blend together throughout the 14 tracks. None the less, after listening to this I can picture Hard Girls playing a dive bar or basement while the crowd sings along. With A Thousand Surfaces Hard Girls show the scene they can hold their own without associations to other groups their linked to (Classics of Love, Shinobu, Pteradon).